In Their Own Words: A B-Spec Family 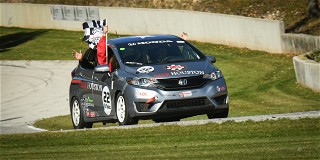 SCCA is a family affair, and that is embodied in B-Spec, where James Rogerson, his son Chris Salyer, and grandson Riley Salyer all race together. SCCA.com caught up with them, along with Riley’s mother, Shelly, shortly after Riley’s B-Spec win this year at Road America as a 17-year-old. In their own words, this is that story.

James:  I first started working as marshal for SCCA in 1964. I entered a driver school and foolishly told them my real date of birth. So I was expelled from SCCA and the two individuals that vouched for me in the open membership vote were censured. I went motorcycle racing instead.  My oldest brother convinced me to do AX in the late 1970s and then again in the 1980s. Around 1994 I saw that Houston Region was going to revive the July 4th Firecracker race in Galveston at Scholl Field.  A chance for me to return to the scene of my “crime”. I was already running PCA with O.J. Young and he and I made the jump to Spec Miata with John Phillips III.

Chris: When I was 15, he took me to my first SCCA Autocross in his Datsun 1600 roadster. He said, “if it rolls, duck your head and hold on." He hit the gas and when he crossed the finish he said "how was it?" I don't know, I held on and closed my eyes. James taught me to drive stick in his Eurospec 79 Porsche 928. I learned I needed a job to pay for tires. Later when James retired and began working at MSR Houston and helped me get my full competition license in 2010.

Life got in the way and my license lapsed. I have always loved cars and speed. I had a car club and we would autocross and drag raced our Hondas when we had time. I never had the means to commit to road racing. When Riley and Tucker were born, I hoped one or both of them would have the opportunity to race someday. Living thru my kids I put him in an outlaw dirt kart and we became a racing family overnight. As a racing family we spend lots of time together and everything revolves around racing.

That “life got in the way” included a diagnosis of Acute Lymphoblastic Leukemia (ALL) in 2011 for Riley’s younger brother, Tucker. Thankfully, Tucker is now in remission, but those proved to be valuable summers for Riley’s racing and his bond with “Papaw” at MSR Houston.

James: Riley spent the summers with us after his brother was diagnosed with cancer.  I put him to work at our Kart Track cleaning and helping customers with their place in line and gear.  When he was 12, I bought an Allison Legend and taught him how to drive a car.  It was just something to do as opposed to preparation for a racing career.

From there we graduated into (James’ H Production) Civic and did the race school two weeks before he turned 15.  We got him qualified and he went to the Runoffs in Sonoma in 2018.  His spin and come back to finish fifth made us realize that perhaps he really did have that little extra that it takes to win.

Riley: I live about four and half hours from my home track of MSR Houston so I don’t get as much track time as I would like. My dad built me a race simulator and that has been a big help to learn new tracks.

Chris: My competitiveness and having to make this happen on a broken shoestring budget does create stress at so many levels. I am often the one that blows up when the race is close between runs or when things fall apart. I am having to learn how to set up the cars, rebuild broken parts and fabrication. When it comes to driving, I push Riley more than he would like but he has become a very competitive racer and he and I expect it to happen the same way. You race as hard as you can with fewest of mistakes and do it clean. No dirty racing! Riley has a great small group of friends for him to destress on off days riding and racing in BMX, fishing and photography. I choose to work in my shop, be creative and make things or nap in my shop chair when the weather is nice.

Shelly: All three get along well on and off the track.  They all give each other a hard time every now and then but at the end of day they all love each other. Racing is what Riley has always wanted to do and he’s very thankful to his Papaw James for giving him the opportunity to race.

James: We worked very had that next year to get him in contention for a podium in HP. But John Phillips III took interest in Riley and offered us a drive in one of his B-Spec cars during 2019 season. Joe Gersch bought a Yaris and offered me his Mazda 2 for Riley.  He qualified in that car for the 2019 Runoffs.

Now qualified, it was time for Riley’s B-Spec Runoffs debut at VIR.

James: I built a B-Spec Honda Fit for Riley three weeks before the Runoffs at VIR. He finished 6th in a car he’d never driven before that week. Not even a test. When Phillips got off the podium at VIR he said, “Next year is Riley’s year.” I laughed and reminded him how many things have to go right for anyone to win. He reaffirmed that 2020 was Riley’s year, all I had to do was my part.

Chris: I never knew how competitive I was until I watched Riley drive and knew he had the ability to get up front.

That finish proved, at least to dad and grandpa, that Riley had what it took to be successful. It also sparked a memorable idea for Chris.

Riley: My Dad is new to B-Spec but raced in SCCA went I was little and this year was his first runoffs.  We have also done a couple of endurance races together.  He plans on running B-Spec again this year so I’m looking forward to more racing with him. He’s been my biggest supporter so I want to do the same for him.

Chris: With James getting older, myself having some health issues and Riley being at his prime, I thought it was time the three of us raced in the same class at the runoffs. I wanted us to have a memory to experience. I knew I did not have the seat time to be competitive, but I gave it my all.

Riley: My Papaw James and I have been racing together for a while now in B-Spec.  We race each hard and have rubbed fenders several times. After racing we usually review our videos and over lay our data to see where he is better than me and where I’m better than him.  We treat each other as we would any other racer.

Riley was most certainly the competitive one of the three at Road America. Chris spun on lap seven of the race and jumped out of the car to watch the final laps. James finished 11th.  Coming into Canada Corner on the last lap, Riley made the pass for the lead and the gold medal.

Shelly: In the past I would watch Riley race with sweaty hands and my stomach churning, but with him maturing as a driver I find myself more relaxed watching him race. At the Runoffs this year, add to the mix with my father in law and my husband Chris driving in the same class - it was intense.

Chris: When I spun out early all I could think about was missing Riley win the Runoffs. I swore I could hear the announcers saying he was in the lead. I pulled off and had to explain to the officials I have the right to quit my race and it was no one’s fault so let me go and get out of the car. I rushed to our paddock and ran down to watch the big screen at turn five. It was all I had not to cry with joy seeing him take the checker after the battle he had.

Shelly: We watched the race from the top of the stands at turn 5 and made sure each of them made it through 5 then watched the big screen to see them on other parts of the track. I was nervous when Chris had a big spin and so thankful, he was not injured.  He came off track after the spin and drove down to turn 5 and was able to watch Riley win his first runoffs.

Riley, on tv after the race: It doesn’t even feel real. On the last lap, I didn’t even know if I won or not. But it feels amazing.

James: When I came into pit lane and saw him and the two Sonics I stopped beside him and he held up one finger, the right one.  I parked the car and got out to congratulate him for succeeding. That’s just the beginning for Riley’s career. Though the details are up in there, there are certainly at least two big supporters pushing for a long career.

Riley: I’m excited to see what the 2021 race season brings.  I’m open to racing in a different class or even a different series.  I just want to race. I’m looking forward to runoffs next year at Indianapolis.  I have never raced there but have watch my Papaw race there several times.

James: Everyone asks if I’m proud of him for winning.  That’s silly to me as I have always been proud of him.  He works hard, listens to everyone around him, and executes our collective plan.  But more importantly he does good in school and has life plans that includes financial security going forward.