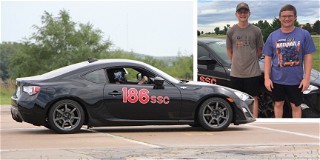 This article first appeared in the September, 2020 edition of SportsCar Magazine. Everyone can read the current and past editions of SportCar digitally here. To become an SCCA member and get SportsCar mailed to your home address monthly in addition to the digital editions, click here.

When the Tire Rack Solo National Championships return to Lincoln Airpark in Lincoln, Neb., this September, Nebraska Region members Conner and Mason Herrick will be among the faces familiar to many. Between the two of them – Conner, 17, and Mason, 15 – they already have claimed a bundle of National trophies and titles in JA and JB, SCCA’s karting classes. For Mason, that includes five straight Nationals and ProSolo wins and four consecutive McClintock-Berry (Triad) awards, with Conner adding a fourth-place JA finish at the 2018 Solo National Championships and a third-place trophy for the 2018 ProSolo season. Now, for 2020, they have stepped up to SSC in a 2016 Scion FR-S, and they hope to continue their winning ways.

The chances are good they will do just that in the years to come. Both have been interested in cars for as long as they can remember and have been SCCA members since 2011, when they began to compete in karts. Basically, Conner says, for both of them, “We’ve been going to SCCA events my whole life.” Dad (Mike) and Grandpa (Don Herrick) autocross also, adds Mason, and Solo is simply something they’ve grown up with.

Mom (Sarah) does not compete, Mason notes, but because he does not yet have his full driver’s license, she is his frequent ride-along partner during autocross runs in the Scion.

“We thought SSC would be the easiest way to get into a car, because there’s not much you can change, and not much to go wrong,” Mason explains. Still, he adds, the transition from karts to cars has required some adjustments.

Conner agrees, “It’s the same for me, except I had the advantage of slowly working my way into it, since I had my permit while I was still in karts. But, switching to a car is – it’s just bigger; it’s hard to get used to the size of the car.”

Yet, at Salina Region’s first 2020 autocross event on May 9, Mason was fifth in the PAX standings and Conner 10th out of a field of 53. At the Midwest Division Solo event in Salina on June 6-7, Mason claimed third in PAX and Conner 30th in a field of 98 drivers, with 83 having recorded times.

The car and the SSC class offer a lot of opportunities, the brothers say, and sharing the car offers advantages, too. “For setup stuff, like tire pressures, we can ask each other how the car felt and get ideas on what we could do to make it better,” Mason says. “The interval between our runs is pretty short; so, we work together to make sure the car is ready for both of us.”

As for the car itself, it’s simply a lot of fun, Mason adds, and a new set of spec tires has made it even more fun.

“The new tires are really good,” Conner explains of the latest Falken tire. “The car was fun before, but these tires just do everything better. I got lots of seat time in Lincoln [a Nebraska Region test and tune on June 13], and I’m trying to push the car more and more. The biggest thing I need to work on is being more aggressive in tighter elements. It’s nice having a co-driver so we can bounce ideas off each other.”

Mason concurs, adding, “Since I’m pretty new to the car, I’m still learning what the limits are. At one point, the car just felt odd; so, we looked and found a disconnected swaybar mount. My dad and I fixed it, and then the car was good again.

“The car is really fun, and I can’t wait until next season, when I’m old enough to not require a passenger.”

Aside from autocross, the brothers also are interested in RallyCross, which they have participated in as time allows. For them, it’s less intense than Solo competition. “The grip is a lot less,” says Mason. “You have to focus more on getting the car set up before a corner. The event itself is more relaxed than autocross. So, it’s kind of nice to have a break, going to a RallyCross.”

There are a lot of people to whom they owe a debt of thanks, the brothers say, not only to their mom and dad, but also to a host of others who have helped and encouraged them over the years.

“Mason and I are very thankful for the awesome competitors and their families we met through the Junior Driver Program,” Conner says. “We can’t mention all of them; so, we’ll just say that you know who you are, and we have been honored to share the course with all of you.”

As for the 2020 Solo National Championships, they will again, as in past years, balance work and school while competing for top honors, the brothers say. (Conner is a high school senior this year while Mason is a sophomore).

“I’d like to get top half in the class, but as long as I’m not last, I’ll be happy,” Conner says about his SSC goals in Lincoln. As for Mason: “If I’m being honest with myself, I would like to get a trophy. That’s probably my goal.”

Not only are Conner and Mason promising young drivers, observes Rocky Entriken, Midwest Division points-keeper and longtime editor of SportsCar’s Solo Nationals report, “they also are often the ones with chalk in hand, marking the course on event mornings. They are both excellent examples of a bright future for SCCA.”