SportsCar Feature: The Heart of It All 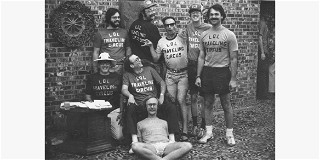 SCCA RoadRally in the 1970s was very different from today, but deep down, it remains the same

From 1970-’78, southeast of Huntsville, Ala., what contestants thought were SCCA’s best Time-Speed-Distance rallies drew upward of 100 teams at each event to the most difficult TSD rallies. RoadRally stalwart Scott Forehand describes it best as “a different time” and “a very big deal back in the ’70s.”

Clarence Westberg begins the story. “They started at a resort in Lake Guntersville,” he says. “They managed to get the resort the week before the general public so there were no locals. The hospitality was the best, including huge bowls of fresh shrimp.”

Forehand agrees. “The hospitality was wonderful, and the field was huge.”

Dave Weiman also remembers the huge bowls of shrimp. He had moved to Texas, so he knew how to eat shrimp with the heads on and not peeled. “It was fun to watch the Yankees trying to figure out how to get to the meat of the shrimp,” he smiles.

Being that the event was about 16 hours away, Land O’ Lakes Region teams had to solve the problem in getting there. Gary Starr joined Westberg and Forehand as “a bunch of us caravanned down together to HOD [and other far away Nationals] in a group of our rally cars. We were called the LOL Traveling Circus [being from Land O’ Lands Region].”

“The trip to Alabama was accomplished in one very long day,” Forehand recalls. “If you weren’t driving, you were sleeping. It didn’t seem impossible at the time.” It was worth it.

“The rallies were incredible,” Westberg shares. “HOP was considered the hardest and best rally of the year. They drew 60 to 100 cars. The rallymasters were Clark Thorp and Dave Flannigan.”

“The rallies were the toughest I have ever run, and I enjoyed them greatly,” Weiman agrees. “Nobody came close to running clean.”

He won one year with six or seven maxes. “[I] watched the paper fly, and the protest committee debated and debated finally throwing out several legs and most of our maxes. Proud of that run.”

Back then “confidence legs,” where the teams would suddenly have a leg that continued for miles, formed part of the test. Weiman remembers spending more than 20 miles looking for “Rabbits for Sale.” He went “on and on [into] Northern Alabama and then crossed into Tennessee, which was a bit disconcerting, and the main road took us back into Alabama and there was the sign: ‘Yes We Have No Rabbits for Sale.’”

Another Land O’ Lakes competitor, Dave Fuss, ran his first National RoadRally there in 1976 with his brand-new Zeron 550 in a Datsun 240Z driven by Brian Jacobson. “We were car 91,” says Fuss. “I think there were 102 starters.”

They never found the last three checkpoints. “[We] finished something like 15th and got the Novice A award,” he says. “I still have that big stuffed dog right behind me in the office. I believe Brian’s became a favorite plaything for his young daughter.”

Fuss also ran with Bob Shapiro in 1977 when they encountered their confidence leg “with an instruction that read ‘Right at 5th protected intersection.’” They also drove into the next state, but stopped for gas, turned around, and followed another car to eventually get to the checkpoint.

“Max late of course,” he says. “We had been right, we just ran out of confidence.”

Fuss remembers about 17 pages in the General Instructions that controlled those events, “But the guys were very creative,” he notes. He’s almost sure that the “concepts of initiation, execution, and completion originated in those Generals.”

Starr, meanwhile, is sure that HOD introduced the rule that “signs quoted in the route instructions must be on the right of the route the contestant would follow in the absence of that sign.”

Forehand with Don Andrews won the 1977 rally. “I see that the 4th-place car that year was Mike McGraw and Casey Kronson with car No. 71,” he says. He remembers it as a one-day event that attracted somewhere around 90 cars, adding, “These events were typically very hard with some very original concepts.”

There isn’t enough paper to record the executions on the course or the other goings-on at the event. For Forehand, it was, he says, “Pretty much the high popularity point of TSD rallying.”