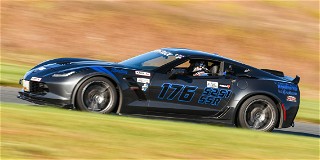 The SCCA Time Trials van rolled into Milleville, NJ for the second to last stop of the Tire Rack Time Trials National Tour powered by Hagerty with rain on the windshield and a chill in the air. But while the chill was still there, Saturday morning found the sun shining on the nearly 50/50 split of New Jersey time trialers and Track Night in America drivers. Warmed by equal parts coffee and anticipation, over 90 participants hit New Jersey Motorsports Park’s Lightning course, a fast yet surprisingly technical ribbon of asphalt on the eastern seaboard.

Consistent with prior Time Trial National Tour events, all SCCA participants were asked to follow SCCA’s COVID-19 Event Guidelines for the weekend, including wearing masks within the designated public spaces, like registration, tech and other shared facilities. Diligently following the guidelines, participants came together to experience the thrill of driving on track, showing a willingness to put forth the extra effort in exchange for some long-awaited fun on track.

Top overall times had two stand outs in the form of Cody Hunt and John Gatzemeyer. Hunt posted the top combined time of 3:06.049, with Gatzemeyer a scant 1.4 second behind with an overall time of 3:07.447, both achieved in Chevrolet Corvettes. But the story was those drivers occupying the 3rd through 5th spots, with all three being separated by merely 0.5 second. James Barry took home the 3rd spot with a 3:10.3 in his Subaru STI, 0.4 second ahead of 4th and 5th, who were separated by less than 0.1 second. Donald Lui, in a Scion FR-S, just squeaked by Chuck Hognell’s Camaro to round out the Top 5.

Top Novice honors went to Vijay Lorick for taking his Volkswagen Golf R to a Tuner 3 win by 7.378 seconds. Battling a couple of more experienced Nissan Z drivers, Lorick was able to post not only extremely quick times, but he also found over one second of improvement from Saturday to Sunday.

The honors for Most Improved went to Sang Yi, piloting his Mitsubishi Evo 10 in the Novice group. Multiple seconds behind the podium on Saturday, Yi dropped right at 5 seconds off his time on Sunday, and posted the third fastest TrackSprint time in the Sport 3, the largest class at the event.

Cody Hunt, a regular at National Solo events the last few years, took the leap and attended his first track day this year. The Top Time award recipient attended his first Time Trial event at CMP a mere 8 months prior as a Novice, progressed to Intermediate while attending Time Trials Nationals at NCM and then laid down the fastest overall time here at NJMP.

The Spirit of Time Trials Award—given to the participant at each event who most optimizes the true focus of “fun with cars”—went to Sam Bernstein for his giving spirit in the heat of battle. When fellow competitor, arch nemesis, and good friend Victor Boniface had tire issues that would have ended his weekend on Saturday, Bernstein offered a pair of his daily wheel and tires for him to use so that he could complete the weekend. While this would have been awesome in and of itself, he also then swapped the other two on to his car as well to, “keep the competition even and fair”. It is folks like Bernstein that embody the culture of “same team” the Time Trials National Tour program is built upon.

The newest award for the Time Trials program is simply known as the Time Trials Champion. Those honors went to Joshua Kuehne, and the entire New Jersey Region, for all of their help with the event, as well as their passion for the program. The Region has been an incredible supporter of the SCCA Time Trials program, and has worked hard to refine and hold multiple TrackSprints of their own at NJMP this year. But it was their overarching support of this event, that earned them the Champion award, which honors individuals who do the most to champion the Time Trials program and support the overall event experience.