Shadowen Hunts Down Another GT-Lite Win 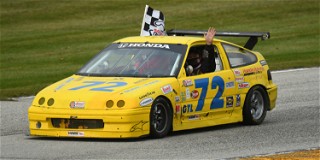 With a qualifying lap 6-seconds faster than any other competitor, it’s no surprise that Tire Rack Pole Award winner Chris Bovis jumped out to an early lead in his Honda CRX Sunday afternoon at Road America in Elkhart Lake, Wisconsin, during the SCCA® National Championship GT-Lite (GTL) race.

But Bovis’ gap never got any larger as defending Runoffs® GTL champion Peter Shadowen—who started fifth in his No. 72 Road-N-Race Automotive/Goodyear/HPD Honda CRX—moved quickly to second and started chopping into Bovis’ advantage. On lap eight, Shadowen passed Bovis for the lead, and Bovis soon pulled into the pits and out of the race. From there, Shadowen easily made his way to a second consecutive GTL Runoffs win.

This was the fourth National Championship for Shadowen. His margin of victory was more than one minute, and along the way, he reset the GTL Runoffs lap record to 2:31.601 around the 4.048-mile, 14-turn circuit.

“We had an awful week changing engines and just a comedy of errors going on, which is kind of an unusual deal. But we got through it, and it finally came together today,” Shadowen said. “I knew if I could get with Chris (Bovis), we could probably try to hang with him. I didn’t know if we could turn his qualifying times, but I thought we could at least make an effort. We slowly reeled in Chris, but I don’t know if that was because he was having a problem at that point. But then he just gave in, and at that point I just tried to not screw up.”

While Shadowen was GTL’s cream of the crop Sunday, the battle for final podium positions during the 13-lap race was truly exciting. Joe Huffaker and his No. 77 Huffaker Engineering/Goodyear/G-Loc MG Midget started second, but he experienced “a moment” on the opening lap and was shuffled back in the pack. On lap two, Lans Stout and his Nissan Sentra contacted the Mazda MX-5 of Jonathan Goodale, sending both down the leader board.

From there, it looked like the podium discussion was going to take place between Scott Twomey’s Toyota Tercel, Michael Lewis’ Mazda RX-7, Roy Lopshire’s Toyota Tercel, Graham Fuller’s Honda CRX and Huffaker who drove his way back into contention.

On lap six, Twomey pulled off the track, but instantly pulled back on and got back up to speed, but it wasn’t enough, and he was removed from contention leaving four cars fighting for the final step on the podium.

Lopshire looked solid most of the race and seemed on his way to a podium finish. But with only a couple laps remaining, he pulled into the pits. At that point, Huffaker, from Petaluma, California, moved to the second position and it until the checkered flag. That’s Huffaker’s 16th podium appearance across 31 Runoffs starts.

“My car was still in F Production trim and I didn’t have a lot of chance to do anything to my car,” Huffaker said. “I’ve never been to Road America in this capacity … so I got to learn everything Thursday. I was fortunate to qualify in position two. But it was great.”

On the last lap, three cars were in the hunt for the last podium step. At turn eight, Fuller exited the corner a little wide, which allowed Goodale and Lewis to pull alongside him. Just as the trio went under the bridge leading into Turn 9 and the Carousel, all three cars touched, spun off track and took themselves out of the race. Bill Meyer, of Russellville, Missouri, came along next in his No. 93 Toyota/Hoosier/Summit/Hawk Toyota Tercel to gobble up his first Runoffs podium appearance in nine starts.

“This is totally unexpected,” Meyer said in disbelief. “I started tenth and figured I could get into the top six, maybe. So, to finish third, this is my best Runoffs finish ever. Just goes to show you: to finish first, first you must finish.”

Stout, from Cornelius, Oregon, came back to finish fourth. And Twomey, of Tacoma, Washington, also stormed to a fifth-place finish.