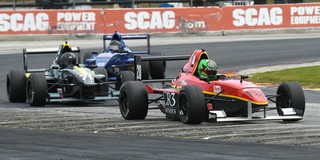 The second row of the grid saw Max Grau of Indianapolis, Indiana starting the No. 71 Competition One FE2 in third position, and Charles Russell Turner of Montpelier, Virginia starting fourth in the No. 23 Southeast Spec Racer/PCS FE2.

At the start, Rettich got swarmed by competitors, dropping back into the melee approaching Turn 1, and spun near the apex. Several cars crashed or spun trying to avoid the fracas, eliminating defending 2019 FE2 champion Rhett Barkau of Freeport, Illinois in the No. 01 Barkaucars.com FE2. Barkau had qualified in seventh position.

As the surviving field headed down to Turn 5, Grau established the lead, with Snyder close on his wing. Turner also survived the first-corner drama to pick up third position. Fourth position was occupied by the No. 88 Amazi Water FE2 of Robert Vanman, from Allen, Texas. Slotting into fifth place was Baily Monette of Milton, Georgia in the No. 5 FE2. Rettich recovered from his spin and rejoined the race in 13th position.

Snyder found his way around Grau in the second lap, but the two contenders were well-matched and stayed close together. Turner hung back in third watching the two younger drivers slug it out. Meanwhile, Rettich began a march back up through the field, moving up to 12th in the third lap, and to ninth by the fifth lap.

Grau grabbed the lead back from Snyder—passing in Turn 1 on the fifth lap—and opened a small gap over the next lap, but Snyder snapped back and quickly returned to Grau's tail. Snyder took the lead back on the eighth lap with another move in Turn 1.

Snyder's car was a handful at times, and Grau looked for a move heading down to Turn 5. However, Snyder kept the door closed and, with Turner patiently waiting for an opening, Grau wisely chose to bide his time. "We set up the car fairly loose to help me on the carousel," Snyder explained. "In Turn 5 and Canada Corner, I'm just able to keep the car facing forward. It was a setup choice."

In the ninth lap, fifth-place qualifier Owen McAllister from Mooresville, North Carolina made a drive up to the leaders, taking over fourth place in his No. 66 Fountain Life FE2 and setting the fast race lap of the event at 2:13.271. The move shuffled Vanman and Monette back to fifth and sixth, respectively. Meanwhile, Rettich kept up his assault, climbing into eighth.

On the 10th lap, Grau made a hard push on Snyder, going side-by-side from Turn 3 and up the hill towards Turn 6. Snyder emerged in the lead, and the action allowed Turner to come right up to Grau's rear wing. Grau made one more effort on the 12th lap, getting a run on Snyder to the outside of Turn 5 but it didn’t stick, and Snyder remained in the lead.

On the final lap, Grau remained close but Snyder gave him no opportunity to set up a pass. "The last lap, I just put my head forward, didn't look in my mirrors, and I hit all my points," Snyder said. "I'm thankful he [Grau] didn't have a chance to get by me."

At the checker, Snyder held a lead of 0.786 seconds over Grau, with Turner just 1.026 seconds behind the leader. McAllister held on for fourth, and Vanman collected fifth-place honors. Rettich had climbed all the way back to seventh place by the time he crossed under the flag.

An exuberant Snyder used his Victory Circle interview to call attention to a family friend battling childhood cancer. "We're doing this for Teddy who's fighting cancer," Snyder said. "We're winning for him and he's winning his race, too."

"There aren't many cars that would be super comfortable half an inch apart like we were," Grau said. "This is the first time I've finished a Runoffs race, so it feels pretty good."

Turner had the best seat in the house to watch the battle for the lead, and he explained his thinking afterwards. "I was playing a long game," he said, "thinking if it went the distance, I'd have a chance. I wanted to be ready to take advantage of any mistakes. But towards the end they were getting better and I struggled just to hold onto them."

The Sunoco Hard Charger in this race was Sam Harrington of Finksburg, Maryland, driving the No. 33 FE2 from a 22nd place starting position to 18th place at the finish.