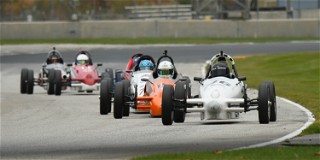 The lead pack of six cars entered the 13th and final lap together, but only four would remain to settle the podium order. Whitston’s No. 12 Protoform P2/Volkswagen and Jennerjahn’s No. 46 Jennerjahn Machine Inc. Vortech FV/Volkswagen passed under the white flag with a gap to Abbott, Hunter Phelps-Barron, Alex Scaler and Brian Farnham, but by Turn 5 the second group of four had used the draft to catch back up.

Scaler and Farnham made side-to-side contact at the exit of Canada Corner (Turn 12 of 14 at Road America), which pinballed Farnham into the side of Whitston, launching the right side of his car into the air before the prior two spun off the track and out of contention.

That separated Jennerjahn from the pack and gave him the room needed to sprint through Turn 14 and up the hill for a 0.642-second victory. The win is Jennerjahn’s first Runoffs podium in a long racing career.

“It feels awesome,” Jennerjahn said. “I had a good feeling, really for the last couple of weeks, that something may be different. It started when I got my motor back from Peak Performance and needed to get it in the car. I asked my wife, and I knew she would say no, but she said yes. She helped me lift it and put it in the car and I said, something is different this year! It feels really, really good.”

Jennerjahn’s run was significantly aided by the Canada Corner action on the final lap. Formula Vee strategy often feels to outsiders like chess being played on a Monopoly game board. This was especially true on the final dip into and through Turn 12, where no driver wanted to lead and all ran through the corner slower than previous laps—likely at least partially contributing to the contact.

“I was going to follow Andrew down into 12, but nobody wanted to lead into 12,” Jennerjahn said. “Brian came on the inside and the three of us—it will be interesting to see our miles per hour—but it was pretty slow. Finally, I thought, well, one of us will have to go and so I just nailed it and got out of there and saw all the stuff happen from behind. It takes some luck to win this race and today I got some.”

With Jennerjahn clear, Whitston, Abbot and Phelps-Barron were left to decide the final two positions. The trio drafted up the hill and fanned out three-wide to the finish line. Just 0.012 separated Whitston from Abbott, with Phelps-Barron crossing just 0.055-second later.

“I was really struggling with about three laps to go,” Whitston, the 2019 champ, said. My brakes really went off and I was struggling every time I went into (Turn) 1 a little bit, but (Turns) 5 and 12 especially. I didn’t know if I was going to make the corner, go shooting off the track, or go over the top of somebody. It was pretty nerve wracking. I was really moving my break markers back. I think that probably led to some of the shenanigans going into 12, because I was just trying to stay on track and see where it came out. I’m really lucky to end up in this position.”

Abbott’s No. 2 Autowerks/Hoosier/Vector Racecars Vector AM-1/Volkswagen was one of four cars who officially led laps by virtue of crossing the start/finish line in the lead, but all six drivers in the lead pack took a turn up front during the race.

The finish was even more remarkable for Abbott because he had already blown two engines during the qualifying week. Still, he held on for his first career podium.

“It means the world,” Abbott said. “Especially after leading the race last year and having stuff break. I honestly couldn’t think of a better two guys to be on the podium with. These two guys represent Formula Vee so well with how they drive and prep their race cars. It’s an honor to be here with them. Just being on this podium is something I’ve been dreaming of since I was yay high when and my dad was going down to Atlanta to run Runoffs. This is pretty sweet.”

Following Phelps-Barron across the stripe was Quinn Posner to complete the top five. Pete Meck earned the Sunoco Hard Charger for his move from 24th on the grid all the way to 12th at the finish. Farnham and Scaler were scored in 18th and 19th, respectively, at the finish.