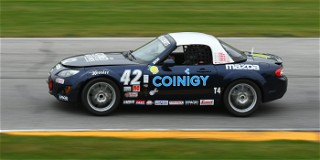 It was cool and overcast Sunday morning when Tire Rack Pole Award winner John Heinricy, of Clarkston, Michigan, led the Touring 4 (T4) field to its 2020 SCCA® National Championship race start in Elkhart Lake, Wisconsin. He immediately jumped out to a lead, chased by T4 defending champion Nick Leverone in the No. 186 Subaru BRZ. Then came the No. 42 Coinigy/Advanced Autosports Mazda MX-5 of Michael Borden and the BMW 320i of Chi Ho.

After a shaky start, Ho worked his way back up to third, but spun into the grass and out of contention on lap four. In the meantime, Heinricy and his No. 35 Hoosier/Hawk/Mobil 1 Toyota 86 established a nearly 6-second gap on Leverone, with three more seconds back to Borden in third. But as the 13-lap race neared its conclusion around the 4.048-mile, 14-turn circuit, everything changed.

Borden, from Greenfield, Wisconsin, tightened up the gap to Leverone, of Mendon, Massachusetts. At the same time, Heinricy looked to be slowing down as both Leverone and Borden quickly descended on the leader. On lap 11, the trio dove three-abreast into Turn 5, and Borden came out ahead.

“This is pretty crazy,” Borden said. “I had a pretty good feeling coming into this weekend. Even this morning, I woke up and had that feeling where this was my day.”

Behind Borden, Leverone was trying to catch up to the leader, but it would prove impossible. He settled for a runner-up finish and his second Runoffs podium appearance in 13 starts.

“He ran a great race,” a gracious Leverone said about Borden afterwards. “He did a great job to get back to our bumper. It was a crazy race.”

Heinricy nursed his ailing machine home to a third-place finish and his 25th podium appearance at the Runoffs.

“I was having some trouble with the clutch on the car, similar to last year,” Heinricy admitted. “But there was still racing going on. You never give up. But the race didn’t quite work out for us.”

Behind the podium battle, Steve Bertok, of Lexington, South Carolina, drove his Mazda MX-5 to a comfortable fourth-place finish. The fifth spot, however, was under contention most of the race as Mazda RX-8 driver Richard Dickey, of Columbus, Indiana, was able to hold off Roldan de Guzman, of Seattle, Washington, and his Scion FR-S

Kevin Fryer, from Bloomington, Illinois, earned the Sunoco Hard Charger award after starting 12th and finishing in the seventh position.