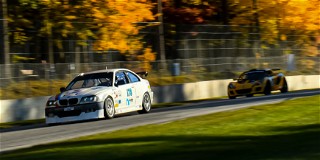 It never hurts to have horsepower, and Paul Azan, of Miami, Florida, used all of his to win the SCCA National Championship Runoffs in the Super Touring Under (STU) class at Road America on Saturday. David Fiorelli, of Coppell, Texas, finished second after third-place Anthony Geraci, of Glen Head, New York, spun in a last-corner effort to pass the leader.

Azan drove his No. 173 Toyomoto Sales/AEM/ActivAutowerks BMW 330 to the lead on lap two, then spent the final 11 laps fighting to stay in front of the pesky bright yellow No. 70 Krugspeed Lotus Exige of Geraci.

Geraci, armed with corner speed that counterbalanced the straight-line speed of Azan, took the lead on lap five—on the brakes going into the fast right-handed Turn 1. But Azan reclaimed the point on the front straight a lap later, and never relinquished the lead.

The Lotus came close on a number of occasions, with Geraci marking one last effort going into the final corner of the race. Pushing hard needing a strong run to take the win, Geraci spun, and Azan had a clear run to his first Runoffs win.

“I don’t think it has sunk in as yet, but it feels real good right now,” Azan said. “I got around David and I was focusing on hitting the marks. I looked up and I saw Anthony behind me, and we were basically stuck to each other. There were a few places that he was faster and I knew it, so I had to be defending. I’ll be honest with you, it was a very easy but difficult race. It was hitting the marks and keeping the racing clean. We had a very good race to the end. It was bumper to bumper.”

Fiorelli started on the Tire Rack Pole and led the opening lap before Azan took the point. Running in a pack that included his fellow podium finishers and Michael Flynn, Fiorelli got over aggressive in the braking zone for Turn 5 and ran wide. That dropped him to fourth temporarily, but he once again moved past Flynn.

The black No. 190 Subaru BRZ appeared locked in a third-place finish, running five seconds behind the lead battle on the final lap, but when Geraci spun in his effort to take the lead, Fiorelli inherited another spot and crossed the line with Geraci on his tail.

“My ABS locked up and I went sailing off in five,” Fiorelli said. “I was afraid I was going to end up in fourth place there for a while, but I got back by Mike and I was able to gap him but I didn’t have anything for these two guys. I kept trying. I did keep fighting, because anything can happen and it did.

“It’s awesome. Last year was my first Runoffs and I barely made it into the top 10 with a ninth-place finish, so this is great.”

For Geraci, the unfortunate third-place finish was still a career best.

“Going into 14, I went a little deeper,” Geraci said. “Unfortunately, the ABS kicked in, I threw it into third gear, spun it around. It was a last-minute change in my strategy, but I had to throw it out there. Paul ran a great race, we were clean, we respected one another. I tried to take it here and there but at the end of the day, we’re all here to have a great time and that’s all it was.”

Flynn crossed the stripe in fourth in the No. 26 Irish Mike’s Racing BMW 330, while Denny Stripling finished fifth in the No. 14 X-Factor Racing/Lightspeed MSP Honda Civic. Alan Orban improved two positions from the grid to the checkered flag, earning an 11th place finish and becoming the Sunoco Hard Charger in STU.