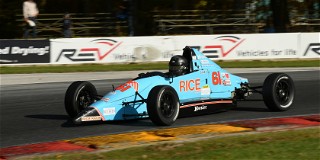 Over the 13-lap race, up to seven competitors made up the lead pack, and all were in the hunt for a win. Tire Rack Pole Award winner Simon Sikes, in the No. 61 Rice Race/Group6gear.com/Susi Unl Mygale SJ12 Honda, took a turn in the lead, as did defending FF Runoffs champion Jonathan Kotyk in a SJ14 Honda. Tim Kautz, in the No. 88 Breaburn/Home Cut Donuts/Euroquipe Piper DF3D Honda, took his turn leading the pack, too, as well as the No. 33 Pure Energy Racing Van Diemen RF00 Honda of Jeffrey Bartz.

Late in the race on lap 12, Kautz had a moment going into Turn 1—kicking the car a little sideways and placing the right-side wheels in the grass. But as is the case so many times in top-shelf FF racing, everything is a game of strategy that leads to the final lap.

When the white flag waved to start that last lap, it was Bartz leading Sikes and Kautz with Kotyk and Perona a little ways back. By the last turn, all five had a shot at the top podium spot. All that was left was a 2,500-foot uphill run to the finish. The margin of victory was only 00.047-seconds, and it was Kautz, of St. Charles, Illinois, who got to the line first. He later received a penalty for passing under caution and was dropped back to seventh finishing position.

Sikes, of Martinez, Georgia, crossed the finish line second, but with results finalized, he takes home his first National Championship in Formula F in his first trip to the Runoffs.

“It very much is a chess game,” Sikes said of FF racing. “For the first 12 laps, things went according to plan. I was just trying to stay in the top three most of the race. It just came down to the last lap once again.”

“That was a normal Formula F race around Road America. It just kind of came down to what was going to happen at the end,” Perona said. “I was kind of being patient. But at the same time, you don’t want to be at the back of that group. I didn’t think we had enough to get to the lead, but I thought we had an outside chance at a podium. But I was having fun and the car was very good. It was nuts, but that’s just how Formula F racing is, especially around Road America.”