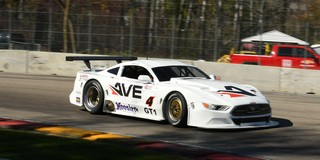 Ave started the race second in the No. 4 Hoosier/Lamers Racing/RPX Ford Mustang and ran behind Tire Rack Polesitter and defending champion Ernie Francis, Jr. for the opening eight laps. Ave’s Mustang began to hit its stride around lap eight, when he pulled past Francis and into the lead under braking going into Turn 5.

Francis chased Ave for just a handful of corners before pulling off with a mechanical issue. Ave knew his Hoosier Tire compound was not as soft as the Goodyear compound that Francis began the race on.

“I assumed it would be sort of halfway through and then I would start peeling back into it. But at the beginning, he wasn’t really running all that quick. I think he was trying to run a pace that would keep his tires under him and figured if he was in front of me he could stay there. His car started moving around a lot and I was just sitting there watching. I just drove up to him and drove by.”

With a clear track in front of him, Ave ran to the finish for a 16.461-second win and his second gold-medal in just nine starts at the premier event. Ave’s last championship came in 2007 at Heartland Park Topeka.

“I used SCCA to get past it (to professional racing) and did a lot of that,” Ave said. “But to be honest, the way pro racing has gone now, there’s very few places you can go where you can build the car you want, the way you want. You don’t see tire wars. All that fun stuff, for me, you have to come back here to do that.”

Behind him, Ruehlow and Ebben were locked in a nose-to-tail battle for the silver medal. Ruehlow’s No. 31 Ruehlow Racing Chevrolet Corvette lost the position to Ebben temporarily on lap six, but regained the point soon after and held on for the silver medal. The runner-up trophy is the best Runoffs finish of Ruehlow’s career, topping his 2016 third-place run.

“It was a good race,” Ruehlow said. “He was on my bumper just about every turn. He kept the pressure on. We had the car setup well, so it was able to stay strong throughout the race. The tires were good. Coming down the back straight after the carousel and through the Kink, Cliff got a good run on me and took me down into [Turn] 12. I was able a lap later to maintain my spot. It was a good race.”

Ebben earned his 11th podium at his home track. In six Runoffs starts at Road America, Ebben has finished off the podium only once and has two previous championship wins.

“It was a fun race,” Ebben said. “It’s always fun racing with Dave. We’ve run here quite a bit together. Everything was pretty uneventful. They sent a car out in three and I had no idea which way he was going to go. He looked like he was going to go across the track and he didn’t, but I was already going to the inside with two-wheels off in the dirt. It slowed my speed down for that straight and Dave got past me again.”

Claudio Burtin’s No. 17 GoShare/AutoPlayhouse/Pirelli Chevrolet Camaro crossed the stripe within view of Ebben for fourth, followed by the No. 66 Stumpf Ford/McMahon Group/Lamers Racing Ford Mustang of Denny Lamers. Don Noe earned the Sunoco Hard Charger award, moving from 15th on the grid to eighth place at the finish.