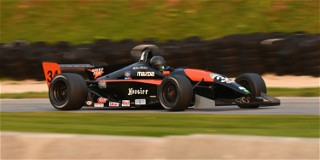 Always one of SCCA’s fastest classes, the Formula Atlantic race did not disappoint at the 57th SCCA® National Championship Runoffs®, held on Road America’s 4.048-mile, 14-turn circuit in Elkhart Lake, Wisconsin. Atlantics are not a class for inexperienced drivers, and this year’s contenders displayed consummate professionalism and drove a clean race.

The Tire Rack Pole Award winner for Atlantics was Spencer Brockman of Westport Connecticut in the No. 34 Mazda of Milford/Hoosier Swift 014a Mazda. Brockman finished third last year—his third visit to the Runoffs podium in the past four years—and he came to Wisconsin looking for his first championship in Atlantics. He was joined on the front row by three-time SCCA champion Hans Peter from Olathe Kansas, driving the No. 6 Phenix Label/Swan Motorsports Swift 016a Mazda. Third place on grid went to defending 2019 champion Flinn Lazier of Vail, Colorado in the No. 03 Colo Tivoli Lodge/Bell Helmets Swift 014a Mazda, while the outside position on the second row went to Lee Alexander of Springfield Tennessee driving the No. 48 Swan Motorsports/Factory48 Swift 016a Mazda.

“The start happened and I wasn’t in it,” Peter quipped later.

In the second lap, Peter showed Brockman his tail, slipping by under braking on the way down to Turn 5, making Brockman the hunter for a few minutes. Brockman regained the lead in the fourth lap and held it every lap to the end.

Turn 5 was also the end of the race for Lazier on the fifth lap, when he appeared to lose brakes coming down the hill and clipped the tire barriers in the escape area. The retirement put sixth-place qualifier Richard Zober of Croydon, Pennsylvania in his No. 74 K-Hill Motorsports/Hoosier/Mazda Swift 016a Mazda into fourth place. Zober moved past Fleck to take up third just a couple laps later.

“We got a little shuffled at the start, and I had to get some passing done,” Zober said. “It took a lot of work to chase down Dudley, and I was finally able to get by him.”

Through the middle and later laps of the race, Peter kept pressure on Brockman, often running just a half-second behind. The two drivers traded bragging rights for the fast racing lap a few times, shaving off tenths until Brockman laid down a 2:04.746 in Lap 10, which Peter simply could not match.

“I just tried to get in a good groove,” Brockman said.

In the final laps of the race, Brockman extended his lead over Peter, ultimately winning the race with a 2.216-second margin of victory. Zober crossed the line almost 34 seconds later to claim third place. Fleck finished fourth and Larry Howard of Kansas City, Missouri claimed fifth place in the No. 151 Epic Electric Service Corp. Swift 016a Mazda.

“This win is for my dad,” Brockman said from the winner’s circle. “We lost him a year ago this week. We’ve been chasing this for a long time, so it feels good. I had some good battles with Hans [Peter], but he raced me clean.”

“We traded the lead a few times,” Peter responded, “but the fastest car with the fastest driver won today. Once he got back out in front, I couldn’t catch him. I just didn’t have anything for him today.”

The Sunoco Hard Charger of the race was Larry Howard, who finished in fifth position after starting 10th.