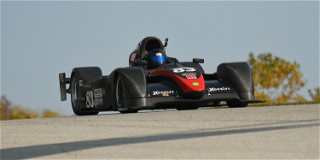 The Prototype 2 race was almost a flag-to-flag display of dominance, but the result remind us that a championship race at the 57th SCCA® National Championship Runoffs® covers a full 13 laps of Road America’s 4.048-mile, 14-turn circuit in Elkhart Lake, Wisconsin.

This year’s Tire Rack Pole Award winner was Robert Iversen of Gulf Breeze, Florida in the No. 4 National Guard Ligier JS49 Honda. Second in qualifying was Greg Gyann of Western Springs, Illinois, in his No. 83 Stohr WF1 Suzuki. The second row on grid included defending champion Tray Ayres of Gainesville, Georgia in the No. 1 Ayres Motorsports Van Diemen ESR Mazda, and in fourth position was 2018 champion Tim Day Jr. of Scottsdale, Arizona in the No. 8 GDRE/DFO Stohr WF1 Suzuki.

At the start, Iversen pulled away cleanly while Ayres took the inside line past Gyann to slot into second place. Gyann settled into third with Day bringing up fourth place. Armen Magregian of Naples, Florida drove his sixth-qualifying No. 31 Grp3 Motorsport/Honda Ligier JS 51 Honda to take up the fifth place slot.

Iversen settled in quickly to work on extending his lead, and the field fell in line behind him. In the second lap, Ayres slowed on the exit of Turn 12—Canada Corner—allowing Gyann to retake second position. “I had a really good run into Canada, and Tray went right on the exit. I was just as amazed as anyone else,” Gyann said afterwards.

The slow exit from Canada left Ayres leading Day, and Mike Reupert of Hubertus, Wisconsin in the No. 7 Sunshine Metals/Redline Oil Stohr WF1 Suzuki, who had already passed Magregian for fifth place. Then on the sixth lap, Day made it around Ayres to take the last podium position. However, Ayres showed his championship mettle, closely chasing Day through the long middle of the race, going side-by-side on several occasions.

At the front, Iversen had everything in hand, hitting his marks and driving clean qualifying-style laps while opening a 15.992-second lead by the 12th lap. Gyann sat in second place, watching Iversen pull away. As the race drew towards its end, Ayres spun under braking in Turn 5, allowing Day to get away cleanly and cement his claim to the bronze medal.

But as the white flag flew to signal the final lap, something was wrong with Iversen’s car. As he passed start/finish, his engine sounded rough, and he was well off his pace. Gyann made up 5 seconds by the white flag, then pulled up within sight of Iversen.

“I saw Bob [Iversen]’s car, and I wasn’t even sure it was him. My eyes were cartoon-sized when I realized it was him,” Gyann said.

Gyann made up ground quickly, coming out of the Billy Mitchell curves on the leader’s tail, but waiting until the long haul up to the checker to make his pass. At the flag, it was Gyann over Iversen by 0.732 seconds. However, Iversen was later penalized and moved to the end of the field for use of non-compliant fuel. That put Day in second place. Ayres in third, and Reupert fourth.

“I didn’t think I had any chance,” Gyann exclaimed. “He [Iversen] was gone, but you gotta keep plugging away because you never know what’s going to happen. So here we are, and I couldn’t be more thankful.”

Day was pleased with his results. “Our car was not 100% this weekend, so (where we finished) is a really great outcome for us. Ayres raced me hard and clean,” he said. “We had a whole host of troubles this week, but we know the car’s strong here, so our game plan was to let the race come to us.”

The Sunoco Hard Charger for the race was Thomas Kaufman of Riviera Beach, Florida, driving the No. 07 Stohr WFX-101 Suzuki. Kaufman started the race in 9th position, and finished in 5th place.