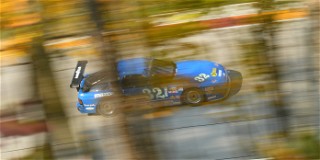 Much was at stake when the GT-3 field approached the green flag Friday during the 57th SCCA® National Championship Runoffs® at Road America in Elkhart Lake, Wisconsin. Led to the start by Tire Rack Pole Award winner Michael Lewis in the No. 32 Goodyear Mazda RX-7, whomever reached the checkered flag first would earn a Runoffs victory and possibly the GT-3 Challenge presented by MPI championship, too.

At the first turn, Jeff Dernehl and his Mazda RX-7 were able to get around the polesitter for the lead. But later during the opening lap, Lewis reasserted himself and took back the front spot. Troy Ermish, in a Nissan 350Z, slotted third behind Dernehl, and Tony Ave’s Nissan 240SX encapsulated the frontrunners.

On the third lap, Ermish and Ave both moved by Dernehl, dropping him to a slightly distanced fourth. Those four drivers then held station for many more laps until the race’s midway point, when the excitement picked up drastically. First, Ermish tried to go around the outside of Lewis in Turn 1, but couldn’t quite get the job done. Later that same lap, Ave set up Ermish for a pass exiting Turn 6 to secure the second spot and close in on Lewis. On the last corner of the same lap, Ave got alongside Lewis, of Poway, California, and the duo drag raced up the main straight.

Ave moved into the top spot after the drag race that led into the first turn. Later that lap, however, Ave had a “moment,” allowing Lewis and Ermish back by to secure first and second, respectively. To cap off two very entertaining laps around the 4.048-mile, 14-turn circuit, Ermish got sideways in a big way going into Canada Corner. It looked as if he’d remove both himself and Lewis from the race, but Lewis saw him in his rearview mirror and took action to avoid contact.

From there, Lewis basically ran uncontested and completed the 13-lap race in first, which made for his 10th Runoffs National Championship.

“We have been trying to get our tenth for a while,” Lewis admitted. “But I’ll tell you, none of them have been as satisfying as that one. That was a real battle.

“Those guys were after me the whole race,” Lewis continued, commenting on fellow GT-3 competitors. “There were some really good cars and really quality drivers taking shots at me.”

Behind Lewis, both Ermish and Ave ended up having car issues that removed them from contention. Dernehl popped back up to second for a bit, but his car quit with only one lap remaining. That gifted the runner-up finish to Taz Harvey, of Danville, California, in the No. 199 Dublin Mazda/Hoosier Mazda RX-7 machine. That’s Harvey’s third podium appearance at the Runoffs.

“The race was pretty relatively calm for me,” Harvey admitted. “I did have some brake issues I overcame. But, anyway, I had a great time.”

The last step on the GT-3 podium went to Paul Young, of Commerce Township, Michigan, in the No. 79 Hoosier/Young Engineering LLC Ford Probe—his fourth podium appearance at the Runoffs. Plus, because he started ninth and finished third, Young was named the Sunoco Hard Charger of the race. And to cap it all off, his third-place finish generated enough points to earn the 2020 GT-3 Challenge presented by MPI championship.

“We had a trying week—we tried some new stuff and it didn’t work. So, we went back to the old stuff,” Young said. “But we had a great race and it was lots of fun.”

Michael Heintzman, of San Jose, California, finished fourth in a Mazda Miata; and Ken Nelson, of Novi, Michigan, rounded out the GT-3 top-five finishers in a Nissan 200SX.