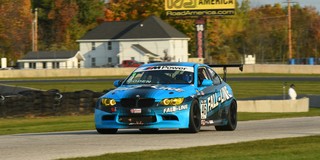 Aquilante had to swap out motors after qualifying Thursday, and suspected he was a little low on horsepower, but still managed to hold off Boden going into Turn 1 to assume the lead. Over the next couple laps, Aquilante and Boden set off together to establish a six-second lead on Thomas Herb sitting second in his No. 144 Fall-Line Motorsports BMW E92 M3 vehicle.

For half the race, Boden—who actually wrecked his T1 car earlier in the week during testing—took several opportunities to show the nose of his car to Aquilante around Road America’s 4.048-mile, 14-turn circuit. Then on lap seven of 13, Boden dived to the inside of Aquilante going into the Turn 8 left-hander and ended up putting the left-side of his car on the grass. While the move may have seemed overly optimistic, it was actually a contact-avoidance maneuver.

“That was not designed to be a move. That was ‘oh my god, I’m going to hit him,’” Boden joked afterwards. “We had some brake issues in testing and made some changes. With that, we needed to pump the brakes up more aggressively. And if we forget to do that, the brakes don’t work very well.”

After that, Aquilante scampered away a bit only to be reeled back in by Boden. Then on lap 10, Aquilante’s car went off in the Carousel and Boden, of Buffalo Grove, Illinois, moved to the lead and went on to claim the T1 victory and his third Runoffs championship.

“It was pretty obvious that Andrew (Aquilante) had a hurt motor. I was just kind of waiting for my time,” Boden said after the race. “But I’m so proud to do this at my home track. We love this place.”

Herb, of Barrington, Illinois, claimed the runner-up spot 25 seconds behind Boden, but seven seconds ahead of the third-place finisher. For Herb, this marks his first podium finish at the Runoffs.

“This is really amazing. I’m just thrilled beyond belief to be standing on the podium,” Herb said.

Behind Herb, a fight for the final podium step was raging between the No. 34 Candelaria Racing Products Chevrolet Corvette of James Candelaria and the BMW E46 M3 of Hugh Stewart. At the finish, Candelaria, of Boca Raton, Florida, edged out Stewart, of Milford, Connecticut, by under a second for his first podium appearance at the Runoffs.

“I came here with a mission to podium at the Runoffs,” Candelaria said. “I thought it was out of reach, but I put my head down … and we managed to do it.”