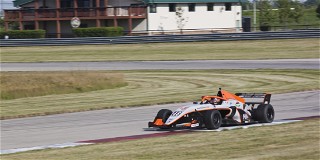 The Missigs are a full-on car and racing family, and Autobahn Country Club is where they live their passion

Jim and Diana Missig have a shared passion for cars and racing that was passed on to their son Jordan, now 22, who is embarking on a racing career of his own. Although it would seem that Jordan’s current destiny was a forgone conclusion long before he was born.

Growing up, Jim watched with great interest as his father worked on a race team that ran a Gurney Eagle in the 1970s. When it was his turn to start a career, he poured his automotive interest into an auto body business in Joliet, Ill., during nearly 30 years of ownership. While running the business, he learned of a novel venture that would soon spring up, practically in his own backyard: The Autobahn Country Club.

“It was at a Rotary Club meeting that Mark Basso first presented the idea of the club,” said Jim recalling that his earliest encounter with Autobahn came before it had yet to break ground.

It would take 10 or so years from that day for the Missig’s to finally become members. Having sold their company, it was now time to live out their passion as enthusiasts rather than business owners. With their home only 30 minutes drive from Autobahn, it quickly became the hub of their leisure and social time. The Missigs took advantage not only of the track and clubhouse, but also of the opportunity to build a “Garage Mahal” where they could store and work on their growing collection of street and racecars on the ground floor while hanging out and entertaining on the top level. From April to October, it’s practically their second home. For Jordan, it presented a rare opportunity.

“It was a teenager’s dream to be able to live at, and have access to, a racetrack five or even six days a week,” says Jordan, who started racing a go-kart at Autobahn Country Club when he was 18.

Proving his driving prowess didn’t take long. Within three seasons, he won the Margay Ignite Senior Class karting championship as well as his third Autobahn Club Karting title. Then in 2018, he jumped into a Radical SR3 to run a partial season in the SCCA Pro Racing sanctioned Blue Marble Cocktails Radical Cup North America along with the Autobahn’s own Radical series. By 2019, the young SCCA Chicago Region member was dominating the Radical series at the track and nearly winning the national series as a rookie, ultimately finishing second overall. Now, in 2020, he moves into a single-seater with Newman Wachs Racing in the SCCA Pro Racing FR Americas Championship. Without the family commitment to Autobahn, Jordan might have never had the opportunity.

“Starting karting as an 18-year-old meant I didn’t have any racing experience compared to many of the others I was racing with,” Jordan admits. “But having access to the track almost anytime has allowed me to get the seat time I needed to get up to speed more quickly than those who started racing at a younger age but had less opportunity to get on track as frequently.”

With Jordan racing, Diana being heavily involved in the Autobahn’s social activities featuring numerous ladies-only opportunities to get behind the wheel and having a place where he can enjoy his car collection, Jim Missig looks back on when he first heard about plans for the Autobahn Country Club.

“Although I knew that someday I would be a member at Autobahn, I never imagined having a family that loves cars and racing, and that we would be in the position we are today,” he says. “I couldn't have written a better story, nor would I change a thing.”

Autobahn Country Club is on occasion referred to as the “granddaddy of automotive country clubs.” However, general manager Craig Cunningham says that despite the label, Autobahn is still growing.

“Sure, we’ve been around longer than most, but we are still firmly focused on the future,” he says. “We’re always looking at how we can continue keeping Autobahn fresh.”

Despite the continual expansion, there remain many opportunities to build your own trackside garage or condo. Memberships are available at three different levels, and for those who just want to get out on track, there are nine different individual and group programs that enable to you to enjoy more than five miles worth of racing, karting, and off-road track.