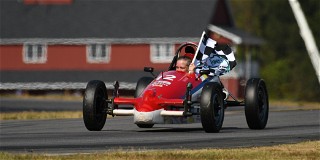 A Sports Car Club of America® competition class unto itself from the early 1960s, the roots of FV actually sprouted from SCCA’s Formula Junior class that emerged in the 1950s. Amateur racer and Volkswagen dealer Hubert Brundage, a member of SCCA’s Hall of Fame, commissioned Enrico Nardi to construct a single seat, mid-engine Formula Junior car in 1958 built around a standard Volkswagen engine, transmission, brakes, wheels and suspension. Though it was never competitive, by 1964 the SCCA had recognized the now Fiberglass bodied Formula Vees as a class. And in 1965, there were more than 1,500 in the United States.

Like a pandemic, but in a good way, FV spread across the pond and infected Europe. Soon after during the 1970s, a quicker Formula Super Vee class arose. Over the years, the FV sled has held the likes of Elliott Forbes-Robinson, Keke Rosberg, Niki Lauda, Emerson Fittipaldi, Nelson Piquet and more.

Having recently celebrated its 55th anniversary, FV still provides amazing competition today at Hoosier Super Tour, U.S. Majors Tour® and Regional SCCA events across the country. Volkswagen recently took a brief look at the history of Formula Vee. The article, found at VW’s newsroom website, starts out by stating, “Forty years after it was last sold new, the original Volkswagen Beetle can still be found on American roads, a testament to its popularity and engineering. The same holds true for American race tracks, where an important part of the Beetle legacy has only grown more popular over the years.”

From there, the piece talks about how Formula Vee, since the 1960s, has offered one of the most competitive and affordable forms of open-wheel racing anywhere in the world. Featured prominently in the piece is Andrew Whitston, the 2019 SCCA® National Championship Runoffs winner in Formula Vee. He talks a bit about what competing in Formula Vee has meant to him over the years, and how the entire Whitston clan has been involved.