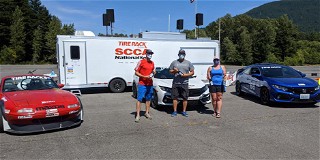 For the second consecutive week, the Tire Rack SCCA Solo program was at the Hampton Mills Old Lumber Yard in Packwood, Washington, for an event – this time for the Tire Rack ProSolo.

Class action was both fast and furious. (note – no one was actually “furious.” Probably.)

In the “fast” category, Jason Bucki led Jay Balducci by a narrow margin after Saturday’s runs in B Street (2WD). Both found time on the left course on Sunday morning, but Bucki held on for a 0.043-second class win.

A little more “furious,” Annie Gill was serving as both a driver and the Chief Steward for the event. To add insult to injury, her car was backed into on Friday night. Still, Gill made massive time gains on Sunday morning to take the Ladies Class 2 win and went on to win the Ladies Challenge.

The Bump class was a mix of XP, AS, CS and ES – Mack Tsang (AS) led after Saturday but couldn’t find time Sunday morning. Andy McKee found more than four-tenths on the right to take the win. Jaejun Yoo moved to second, 0.292-second behind McKee, while Tsang held onto third place.

The Bonus Challenge was furious for everyone except for winner Matt Zyskowski. Zyskowski took the win by virtue of not getting red lights. Every single driver paired against him red-lit in the challenge, and Zyskowski won without even running the right side course.

The Tire Rack SCCA ProSolo Tour remains on the West Coast for this weekend’s Tire Rack SCCA Fontana ProSolo at Auto Club Speedway in Fontana, California, July 24-26. More information about this event and the 2020 ProSolo season can be found here.