The Driver School Rollercoaster: An SCCA Women on Track Experience 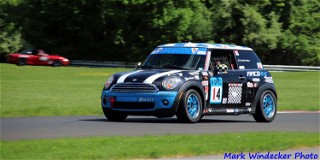 Back in May, we shared that the SCCA Women on Track initiative was helping a woman attend her road racing driver school. Now that Cindy has successfully completed that weekend, she shared the experience with us!

I had been waiting for this experience for several weeks. The classroom day was here. Thirty-one students and I am the only woman. No problem, we are on a zoom call. The instructors were good with teaching all the important stuff and answering questions at the end. I was still unsure of a few things, but I figured the test is open-book and it will become clearer when I hit the track. I met with Frank Schwartz during the week for setting the seat in the right position, so I am ready to go.

Almost one week later, Friday night, and I am excited about the next morning at the track. Morning comes and excitement and nervousness abound. Sandwiches made, coolers packed and just a short 15-minute ride to Waterford Hills and I am going to be a racecar driver. At the track, I met “Honda Ron,” George Spanos who was there to help with the car and Steve my instructor. They are genuinely nice and good at keeping the atmosphere fun. There was a driver’s meeting at 9:00 a.m. where they went over everything we could expect for that day. After the meeting, my husband Joe and I part. He had to go get ready with his car and I walked to the cool looking Mini. At that point, the nerves were becoming unsettled.

I was in Group 1, the “small-bore” group. I get into the car and take off for the grid. What did he say? Are we going out thru pit lane or out the back onto the track? I just followed the other cars. 5 MINUTES, 3 MINUTES, nobody next to the car. 1 MINUTE…what did I get myself into?

Onto the track, how cool that I remembered how to drive a stick shift. All I had to do is stay on the track, find the cones marking the apexes and do not hit anything. I did it! I came back into the paddock and Ron, George and a couple of other drivers greeted me. I let out a big woohoo.

My second time out on the track is going to allow passing, but only on the back stretch with a point. My greatest worry is that I am going to be in somebody’s way. Ron and George tell me several times that I should not worry about it. Just stay to the left on the back stretch, watch your mirrors and let them go if they are faster. I went out onto the track and again I felt comfortable, until I got to the back straight. A car came up behind and I pointed him by. Oh, he did not go, and another car came up and he did not go by. Now my nervousness is really ramping up. What am I doing wrong? The session ends and I pull into my paddock spot and immediately my instructor Steve can tell something is wrong. I told him what happened about passing. Again, he reiterated that I should not be so hyper-focused on passing or being in the way. This is driver’s school and you are not the only one feeling like this. Honda Ron looks at the back of the car. There is blacked-out tint on the back window. No wonder nobody saw me point them by. After discussion with the lead instructor and a couple of other drivers in the group, I would use the turn signal to show them which side to pass on. Now I must remember to do something else besides staying on the track, hitting my points and do not hit anything.

Lunch time and an exam. I do not feel like eating. I am trying to be cool and calm, but the next session is full passing. I had time to debrief with Steve and talk with the other two guys in Ron’s cars and a couple of other students that are being incredibly supportive. They know that I am concerned about being in someone’s way and ruining their day. One of the other students, Todd, (probably in his early 20’s) asked me how old I was, and I told him “58”. “No way” he said, and he told me that I rocked. That felt good. But I am still nervous.

Ron had removed the tint on the rear window just in time for the third session. I told the grid worker that I wanted to start in the back. At least I would have a few laps before the others caught up. No problem and off we went. The first couple of laps were fine and then suddenly I felt terrible. Fortunately, the end was near, and in another couple of laps I pulled in and back to my spot. I had worked myself up into a tizzy with worry and fear about being passed. George and Steve said I looked white and I had tears coming from my eyes. I honestly did not know if I could do this. How could I let everyone down? The car, the suit and all the time and effort that wonderful people had put into this adventure.

The time for the fourth session was here and I just could not do it. So, I was sitting down and sipping on some soda. I did not feel well. Jerry, the Chief Steward came over on his cart and wondered why I was not out there. After I told him why, he insisted that he take me to the ambulance. They checked my blood pressure and heart rate. Both were elevated. They gave me two choices. They could take me to the hospital in the ambulance, or I could have someone take me to an Urgent Care. I did not want to make a scene with them, so I will have someone take me. I met up with my husband as I was walking back to the car. He had no idea what had taken place.

I started to calm down, but my stomach was still not in shape to go out for the fifth session. Now there was worry of not passing the school and not getting my novice license. How do I explain this to Velma Boreen and Linda Duncan? What kind of woman won this deal? Everyone that I met at the track was so supportive and caring. It was a little overwhelming to have that many people behind me and this experience.

The day at the track was over and Joe and I discussed what to do on the drive home. He said that most of the students are anxious about being on the track. For many, driving a racecar is a brand-new experience. He reassured me that I could do this and that I should not worry about being passed or passing someone. But if I did not want to finish the school, he would support that decision. What to do?

Sunday morning came and I decided to go and finish the school. I was amazingly comfortable with what my instructor, other students and my husband told me. I am going out there and have fun. The day’s activities were stepped up. We lined up on the grid as you would for a race. We followed the pace car and practiced the start of a race a few times. The last event of the day was an actual race. I can only say that I am so happy that I stuck in there. It was more fun than I ever thought it would be. The highlight of the day was receiving my novice permit! I did it. But not alone. I am humbled by all the support I received.

This experience was a roller coaster of emotions. From being disappointed when I received the call that I finished second in being able to do the school. Then finding out that I was going to do the school. I enjoyed speaking with everyone from SCCA that were involved in this endeavor. So much anticipation and excitement to wondering if I had the nerve to race. Finally doing it and looking forward to racing again.

What I got most out of the weekend was the friendships made and realizing how much of a family the racing community is. Thank you SCCA Women on Track.