History Made At Thompson Time Trials 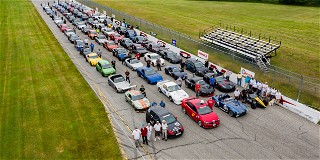 The fourth event of the 2020 Tire Rack SCCA Time Trials National Tour Powered by Hagerty brought 88 drivers to Thompson Speedway Motorsports Park July 3-4. Along with celebrating Independence Day, participants also honored the 75th anniversary of SCCA’s first competitive event, a time trial held on Thompson Speedway’s oval, prior to the completion of the road course. Friday evening, all participants gathered on the oval for a photo commemorating the occasion.

Consistent with prior Time Trial National Tour events this season, all SCCA participants were asked to follow SCCA’s COVID-19 Event Guidelines for the weekend, including wearing masks within the designated public spaces, like registration, tech and other shared facilities. Diligently following the guidelines, participants came together to share a great event experience.

Thanks in no small part to successful time trials programs in the area, the experience level at Thompson was very high, making the choice for Most Improved honors difficult. Eric Voelkle entered the event with track experience, but this was his first Time Trials. The award can be given based on progress over multiple years, multiple events or just within the event. In Voelkle’s case, it was his evolution as a member of the overall Time Trials “team” on track that earned him the honor.

The Breakthrough Performer at an SCCA Time Trials event is the person who has moved within SCCA programs to discover Time Trials, almost always with a story to tell. Victor Morando was an avid SCCA autocrosser before having to take a long break to take care of a growing family. In 2015, he returned to the Club through Track Night in America and this Spring earned his Road Racing Novice Permit. In fact, he used the Time Trials National Tour event as one of his qualifying events for his work-in-progress Full Competition License. Over the weekend, he knocked 1.424 seconds off his fastest lap time from the first session of the weekend to the last. For that, he was the Breakthrough Performer at Thompson.

The overall top five finishers represented four of the five categories and four different classes. In fifth, James Barry piloted his Max 2 Subaru Impreza to a total time of 3:22.318. Just 0.588 second ahead of him, Keegan Stabley wheeled his Prepped 3 Honda S2000 to fourth overall. From Sport 2, Mark Sarcevicz and his Chevrolet Corvette stood in third overall. Also from Max 2, Donald Lui wheeled his Scion FR-S to the second overall position. Standing on top, 4.013 second faster than anybody else throughout the weekend, David Sanders claimed the Overall Fastest Time with a total time of 3:16.904.

New for 2020, the Time Trials Champion award is presented to the participant who does the most to champion both the program and the experience of Time Trials. The Connecticut Autocross and Rally Team (CART) was not only indispensable throughout the weekend, helping with setup, tech, grid, timing and more, but they also have been some of the most ardent supporters of Time Trials in the New England area. For these reasons, the entire CART organization earned the honor of Thompson Time Trials Champion.

Since the program’s inception, an award has been presented at every SCCA National Time Trials event: The Spirit of Time Trials. In Thompson, there was a group of members who went above and beyond to ensure everybody had a wonderful weekend. From Greg Rickes who volunteered to serve as the public announcer all weekend despite not having access to the control tower, to Salvatore Baisley who worked grid despite recovering from a recent motorcycle crash. And when a fellow member was in an incident on Friday, the group banded together to get his car back on track. The thing that tied all these actions together was that the individuals were all members of the Mohawk-Hudson Region of SCCA. For these overt actions and the work the group does to make sure all participants are afforded the chance to have fun with their cars, the Mo-Hud Region was awarded the Spirit of Time Trials Award.