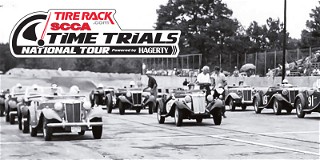 Can you imagine what it was like to be at the first Time Trials event the Sports Car Club of America ever had? That event was part of the Club’s “Summer Meet” in July of 1945, held at Thompson Speedway.

We can’t give you a time machine, but we can invite you to be a part of the 75th anniversary celebration!

The Tire Rack SCCA Time Trials National Tour Powered by Hagerty is hosting a Time Trials event July 3-4 at Thompson Speedway Motorsports Park, and trust us when we tell you that’s it going to be a heck of a lot better than the original.

How could coming to this event, in 2020, be better than the first Time Trials event that the SCCA ever had? Let’s compare.

Availability: Let’s start with who this event is for. The SCCA’s modern Time Trials program is one of the easiest ways to get on track. Have a car and a helmet? Congratulations, you are eligible. In 1945? You needed a sports car to even become an SCCA member. And when we say “sports car,” well, you’re looking at a Bugatti or a Rolls, most often. Cool? Well, of course. But we feel like a field full of Corvettes, Miatas, Civics, minivans and taxi cabs is much more fun.

Format: The 2020 version of Time Trials is pretty much just two days of driving as fast as possible. There are practices on the full 1.7-mile full course, Time Attack sessions, and a TrackSprint–where competitors will run just a portion of the track from a standing start. The best lap from two scored Time Attack sessions plus the best TrackSprint time will be the driver’s weekend score. Back in 1945? It was a lap around the half-mile oval (the road course wasn’t finished yet), and everyone knew Weaver’s Bugatti was going to be quickest. And that was before he installed the 91.5 cubic inch blown Miller straight eight, which they all knew was going to make it even quicker. Then, they ran quarter-miles from a standing start, where Weaver wiped the floor again with the field.

Cars: In 2020, any well-maintained car is allowed. There will most certainly be a variety. In 1945, it sounds cool to mention the Bugatti, or the Rolls Royce Ghost, or the Mercer Raceabout. But put them on track together, and the 90 horsepower at 3800 rpm that Weaver’s Bugatti pulled from his 151 class Peerless marine racing engine with four-cylinder single over-head camshaft unit doesn’t sound so impressive.

Advantage: 2020 Time Trials, by far, on speed alone. We’ll give partial credit to the fact that if the 1945 cars showed up, we’d probably wander over and see what was happening.

People: This isn’t even close. The 1945 SCCA members were a stuffy bunch, with rules that make their club look nothing like our 2020 version. Only six members participated in the time sessions, and not many more were in attendance. Compare that to the fun about to be had by more than 100 at this July’s Time Trial Nationals, and the modern-day crowd wins again!

Food and Beverage: Typically during a Time Trials event, we have a large barbecue and beverages that add to the event. While we’re still trying to figure out how this can happen while we social distance, we know that even the 1945 event had some issues. From the July/August SportsCar Magazine: “After an unsuccessful attempt to obtain lunchion at the nearby “Russian Bear,” where we were very shabbily treated…” Even that group had an issue!

The Club has come a long way since then. The events have taken on more of a focus; they’re a bit more refined. But at the end of the day, the Club is still about having fun with cars–though we may be a little less stuffy now than we were then.

We’re thankful for those founding members and the culture they began to organize. That spirit remains even as it has evolved and grown, and with any luck and even more passion, we’ll tell the story of this event and others like it in another 75 years. Want to be a part of it? You still can!