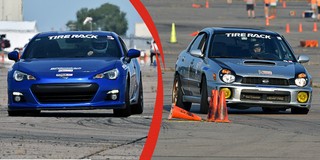 Driver of the Year honors are presented to the Solo® competitor who has demonstrated exceptional skill or has overcome major obstacles to produce an outstanding performance at the Solo National Championship. During the 2019 Solo Nationals, Heitkotter competed in Street Touring Xtreme piloting a Subaru BRZ. The car would be considered a “budget build” as compared to other vehicles on the grid. But after the first day of competition, Heitkotter sat second. On day two, Heitkotter came to the start line in fourth for his final run, .833 seconds off the leader. But by the end of his last run, Heitkotter not only covered the deficit but jumped into the lead by .448 seconds. That was enough for him to secure his tenth Nationals Championship.

Rookie of the Year recognizes an outstanding performance at a first Solo National Championship by a driver with limited competition experience. In a 20-driver Street Touring Hatch field at the 2019 Solo Nationals, Roller fought his way to a runner-up finish driving a Subaru Impreza WRX. Roller was only .790 seconds off the leader after two days of competition, and he now joins a list of previous Rookie of the Year honorees that include names such as Mark Daddio, Bryan Heitkotter, GJ Dixon, Darren Seltzer, Andrew Pallotta and Tamra Hunt.

Congratulations to both Heitkotter and Roller for their performances and hard-earned recognition.

Photo: Driver of the Year Bryan Heitkotter (left) and Rookie of the Year Ken Roller (right)