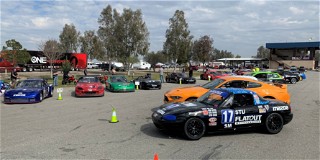 Opposite Weekend: Buttonwillow Raceway Park has more than 40 different race and test configurations purposely designed to emulate street and road racing courses throughout North America. For the past couple years, Hoosier Super Tour events have been run on the No. 25A clockwise, 3.02-mile configuration. This year, however, there’s been a switch to the 2.95-mile, No. 25 counterclockwise layout. So, what does that actually mean for competitors?

“You wouldn’t think running counterclockwise would make a big difference because it’s the same configuration, but we’re just running it the opposite way,” said Michael Lewis, a 35-year SCCA member who has nine Runoffs® National Championships to his credit and who has been racing at Buttonwillow for 25 years. “Counterclockwise actually completely changes the characterization and the handling characteristics of the car. Suddenly, a third-gear corner is now done in fourth gear because you’re entering it so much faster.

“I’ve done a lot of laps around Buttonwillow, but it has been a while since we’ve run the counterclockwise direction,” Lewis continued. “It’s really different, but you’ve got to be able to adapt. In particular, the braking areas are much more challenging when you’re running counterclockwise because you have to crest hills, and you’re in turning zones while braking. It’s tricky. It’s really quite a driver’s test.”

Who will pass the test this weekend? That will become clear by Sunday evening.

For the past two years, Miserendino -- a five-time SCCA Runoffs® National Champion who has been running at Buttonwillow for nearly 20 years -- has swept the weekend by winning both Saturday and Sunday SRF3 races. Each year, the SRF3 field at Buttonwillow has been stacked with plenty of entries and top-tier talent, so demonstrating such dominance is truly impressive.

“I have a lot of laps here and I really enjoy the racetrack,” said Miserendino, who lives in nearby Bakersfield and has been Buttonwillow’s Business Development Manager for almost a decade. “I feel this track suits my driving style. There are some technical and some fast spots. Having a good, fast car helps, too, and a little bit of Lady Luck.

“People think since I work here at the track, I drive it all the time,” Miserendino continued. “It’s actually quite the opposite. I’ve not driven a race car on this track since last September. People think I head out on track and drive after work, but I don’t. When I’m done with work, I go home.”

Will Miserendino be dominant again during the 2020 Hoosier Super Tour weekend at Buttonwillow?  Tune in to www.scca.com/live and find out through live Timing & Scoring, video and Super Tour Radio presented by Hoosier Racing Tire.

Opening Salvo for GT-3 Challenge: The 2020 GT-3 Challenge presented by MPI commences this weekend at Buttonwillow Raceway Park during the Hoosier Super Tour. This is a series boosting participation in the GT-3 class and supported by Mazda, Max Papis Innovations, Penske Racing Shocks, AiM Sports and Hoosier Racing Tire, with new partners Goodyear Tire, Carbotech Performance Brakes and Bell Racing Helmets jumping aboard this year. This is the series’ second year, with the inaugural GT-3 Challenge champion being Jeff Dernehl.

This weekend’s field at Buttonwillow is comprised of 11 competitors. The Mazda RX-7 is well represented, being the weapon of choice for drivers Scott Graham, Taz Harvey, Mike Henderson, Guy Laidig, Michael Lewis and Jose Rodriguez. There will also be a Mazda Miata out there in the hands of Michael Heintzman. Nissan then has three entries, two being 240SX vehicles driven by Tony Ave and Douglas Ruthroff, and the 350Z of Larry Hansen. Then it’s Wolfgang Maike flying the flag for Toyota in a Paseo.

Buttonwillow is the first of five scheduled GT-3 Challenge rounds in 2020 -- the others taking place at Hoosier Super Tour events at Michelin Raceway Road Atlanta and Watkins Glen International, as well as Road America in July, and finally SCCA’s National Championship Runoffs® in October.

New Look Timing Page: Several changes were recently made to the live timing page at www.scca.com/live. For starters, the screen has been optimized for mobile view. Other enhancements include:

- Light/Dark mode allowing users to toggle between the standard (white background) page and a new dark background screen. For mobile users, this should be automatically selected based on your phone’s settings (if you use dark mode, it should select dark). Toggle icon is located next to the “Sort By” button.

- When sorting by class (select the “Cl” in the column header), there is now a bar separating classes and the “gap” is based off the leader in class, instead of the overall leader. If you are in class mode, to switch back to overall mode, click on “Pos” in the column header.

- You may also still select an individual class in the drop-down menu, which will isolate that class and include the best segment, speed and times in the purple bar.

- The Time Elapsed/Remaining and Lap count is now in the Timing Column Menu to the left of the purple (best in session) bar.