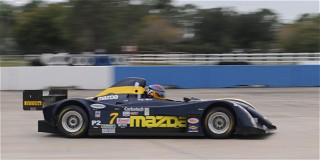 We’re well aware that the calendar flipped to 2020 nearly two weeks ago. And we know that there have already been a handful of SCCA events put on by Regions on the first weekend of the year. But for many, the new year begins when the gates open at Sebring for the annual Hoosier Super Tour event hosted by Central Florida Region.

The event truly is the “Winter Vacation Super Tour,” as only 106 of the 336 entries on the entry list are from the heavily populated state of Florida. Competitors have come from across the country and into Canada for the three-day event.

Full Refresh: For many drivers, this is the first time a car has been on track since the Runoffs last October at VIRginia International Raceway. For some, this week was the first time they looked at the car since then.

“Being new to this class, we had a lot of long nights with a lot of work to get us here,” Ayres said after his Runoffs win back in October. The longtime Spec Racer Ford competitor had decided a new challenge was warranted and came out on top.

But that effort can zap mental and physical energy. The No. 77 Ayres Racing Van Diemen RF00 Mazda came home from the Runoffs and went straight to the garage. Last Wednesday, Ayres started some prep work, loaded it up, and headed for Sebring.

“I was ready for the break,” he admitted.

So far, so good. Refreshed and ready to get back on track, Ayres was the quickest of the P2 class cars in Friday’s qualifying.

X Factor: Sebring marks the Super Tour debut of the new structure of Runoffs eligible classes. Among those classes are the Formula X class, which encompasses open wheel cars that include the previous Formula Mazda, Formula Four, and the newer pro-class USF2000 machines. Four cars turned laps in qualifying in the class, many F4 machines which are now eligible for a National Championship in addition to the SCCA Pro Racing title.

Jacek Mucha is the only taker in the new Prototype X class this weekend. While not Runoffs eligible, the class includes homologated prototype cars that are no-longer eligible in professional racing classes, ranging from older IMSA GTP cars to Daytona Prototypes and LMP Prototypes.

The Road To Road America: Among the major discussions in the paddock on Friday was SCCA’s recent announcement on Runoffs qualifying. Most were in favor of using points to qualify and had turned their focus to which path they’d be focusing on.

Included among those with a plan is a well-known professional racing outfit that has decided to scale back their professional racing effort and instead focus their nationwide travel on Hoosier Super Tour events, citing the value of the effort for them as compared to racing that they’ve done in the past.

More information on Runoffs qualifying can be found here.

Results and more information from the event is available on the Hoosier Racing Tire Sebring Super Tour event page here.