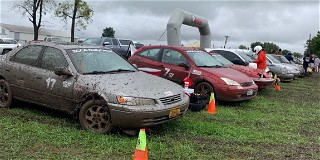 TOPEKA, Kan. (Sept. 24, 2019) -- Even though the dust and excitement have hardly settled on last weekend’s 13th running of the DirtFish RallyCross National Championship, the Sports Car Club of America® is already making plans for the 2020 event.

“We are very excited to host the SCCA RallyCross community in August of 2020, where the SCCA’s most accessible form of extreme motorsport will be on display for fans, competitors and enthusiasts,” Kertscher said. “We are all about hosting events and programs where people can have fun with cars. From our winter autocross events to club days, track days, driving schools and especially our race events, there is always something going on at America’s National Park of Speed."

Mike Cobb, SCCA’s President & CEO, said Road America is a great fit for the Club’s championship RallyCross event. Centrally located in the Midwest, Road America has both the infrastructure and open space required to conduct the competition. The current plan is for RallyCross competitors to occupy a plot of land found at the end of the main straight just before Road America’s turn one. The paddock would be set up alongside the fence line, and the competition course located in an open area just northeast of that paddock.

“Road America and SCCA have had a great relationship for many, many years,” Cobb said. “Of course, the Club’s WeatherTech Chicago Region® June Sprints® has been run at the legendary track for more than 60 consecutive years. And the National Championship Runoffs, which called Road America ‘home’ from 2009 to 2013, will be returning to the venue next year. We’re ecstatic to be adding another top-tier SCCA event, the DirtFish RallyCross National Championship, to Road America’s 2020 event calendar.”

SCCA RallyCross is a scaled-down version of a rally stage laid out on a non-paved plot of land where the course is delineated by traffic cones instead of trees or rocks. Participation requirements are considerably less than those associated with other forms of performance rally, so drivers usually only need a mechanically sound, hardtop vehicle and a helmet to come play in the dirt.

Established in 1955, Road America is located midway between Milwaukee and Green Bay, Wisconsin. The world's best racers have competed at this legendary facility made up of 640 acres that some refer to as the “America's National Park of Speed.” In addition to public race weekends, Road America offers a variety of group event programs, the CTECH Manufacturing Motorplex for karting and supermoto, and the Road America Motorcycle and Advanced Driving Schools. For more information, visit www.roadamerica.com. Follow Road America on www.facebook.com/RoadAmerica and on Twitter: @roadamerica or call 800-365-7223.