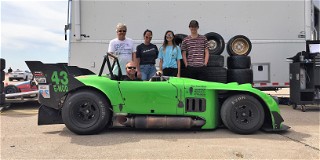 The Kiesel Clan -- When you think of families that have been highly successful in motorsport, names like Andretti, Unser and Force come to mind. But how about the Kiesels? When it comes to the Tire Rack SCCA Solo Nationals Championship, the Kiesels are easily the winningest family. Father Jeff Kiesel, mother Shawn, son Zak and daughter Kaila have combined to claim 25 championships even before the 2019 Solo Nats began.

Shawn, 46, was actually the first Kiesel to claim a Solo Nationals championship, earning the family’s initial victory in 2006 a couple hours before Jeff, 40, took his first win. But starting with that victory, Jeff went on to pull off 12-straight championships at Solo Nats -- the longest winning streak in Solo Nats history -- with most of those wins coming behind the wheel of the family’s 1958 Austin Healey Sprite featuring a turbo rotary engine with custom-fiber front and rear. Jeff leads the Kiesel clan with 12 victories, which is only one more than Shawn has to date. Zak, 19, then counts for two more championships. As for 18-year-old Kaila, she’s only in her second year of Solo Nationals competition -- so there’s plenty of time for her to “chip in” on the family tradition.

Jeff, Shawn, Zak and Kaila are all entered in this year’s Solo Nationals, along with grandpa Mark Kiesel -- the man responsible for getting Jeff involved in the Sports Car Club of America®. With five members of the family in the hunt this year, the safe bet is on the Kiesels adding to their grand total before the week is over in Lincoln.

Victory Circle -- When the world thinks of motorsports victory celebrations, the images which tend to be the strongest involve drinking milk, spraying Mazza sparkling wine, and hoisting trophies. For the top finishers at the Tire Rack Solo Nationals, the goal is to stand on a stage at the championship banquets each year. This year the SCCA is trying something a little different to capture the on-site energy when it comes to recognizing the winners by having a victory circle – complete with podium – for the top-three finishers in each class for photos and celebration.

Adam Benaway won the Solo Spec Coupe National Championship in 2018 and by repeating this year the North Carolina driver became one of the first to compare winning without the winner’s circle to winning with it.

“Every other series uses a podium and it gives it a sense of immediate accomplishment,” said Benaway, who also won his class at the 2018 Tire Rack Time Trials Nationals a few weeks after his Solo Nationals Championship where he got to stand on the KONI Podium. “To bring that to Solo Nationals is really good.”

Dirty Little Details -- When a car hits a cone, needs to be teched, timed or weighed, we know the worker positions which handle them. But when it comes to those hard to predict things which pop up constantly throughout the event, who is there with a hand?

The official – and more politically correct term -- is “Logistic Experts” and this team of competitors and volunteers spring into action from the Tuesday before competition until the last SCCA truck pulls off site  whenever a voice on the radio asks for help.

Though they certainly don’t get the fanfare other workers get, but when things go boom, this silent team goes to work – often with quick dry, brooms and shovels as they have had to do three times this week so far when cars littered the course with fluids and shrapnel, usually getting cars back on course within 20 minutes.

As always, “THANK YOU, WORKERS!”