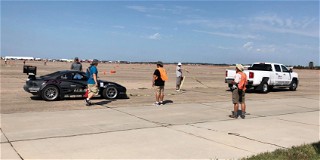 The action is scheduled to begin again in the 8 o’clock hour Wednesday morning. Follow all the action with live timing and audio at http://sololive.scca.com/, or keep track of the competition at the SoloMatters Facebook page. Event updates will also be available periodically each day at SCCA.com.

The old saying “lightning never strikes the same place twice” isn’t true, but the manic nature of where and when it does strike must be dealt with objectively and with plenty of margin of error to protect those at an autocross – especially since people are often the highest points on an otherwise flat expanse of pavement.

Much like you might find at a public pool, the guidelines involve how far away lightning is detected and how long it’s been since the most recent lightning strike. For the Tire Rack Solo Nationals, that decision rests within the Lincoln Airpark emergency plan developed specifically for SCCA Solo events. The plan covers the time and distance safety margins for lightning strikes. For the week’s event, once there has been a strike within eight miles there must be a 30-minute gap before the event can resume.

For Tuesday of the 2019 Solo Nationals, the afternoon’s first strike measured in the area was at seven miles, and luckily Zeus kept quiet thereafter and the delay was limited to 30 minutes.

Check Out the Solo Nationals Morning Show -- Don’t have time to follow all the Solo Nationals action live? Want to digest the latest news from the previous day and get a peek at what to expect in the coming day? Then make sure to tune in each morning an hour before competition begins at https://www.facebook.com/sccaofficial/ for our live Solo Nationals Morning Show. Not only do we recap the previous day’s action and look forward to what’s to come, but we also have special guests such as Mike King, SCCA’s next Director of Solo and Rally. It’s only on our Facebook page, so tune in each morning! And if you miss the live morning broadcast, the show is archived on Facebook for you to go back and watch later.

Photo: Workers come to the aid of a stranded vehicle Tuesday during the Tire Rack SCCA Solo Nationals Championship