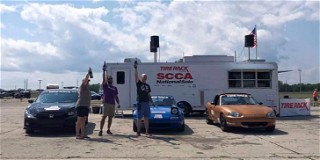 The 2019 Tire Rack SCCA ProSolo® season wrapped up this past weekend in Oscoda, Michigan. The event has become an annual pilgrimage for competitors East of the Mississippi River as the mild weather and picturesque Lake Huron shores make their time away from the course relaxing and enjoyable.

The Ladies 4 class is made up of the drivers from Solo Spec Coupe Ladies, and as we’ve come to expect from a Spec class, the ladies delivered the same close competition as the men. Jennifer Bedell led over co-driver Chris Peterson heading into Sunday morning, but cones on her fastest runs Sunday morning left the door standing wide open for Peterson, who improved by about 0.6 second on both sides to claim the win by 0.136 second. Peterson was unable to stay for the Ladies Challenge, but Bedell advanced to the top eliminator round to face L2-winner Laney Blume. Both ladies saved their best driving for the Challenge as they maintained a close margin after the first side. When they switched, Bedell overcooked her entry to the last tight element on the right course, giving Blume a narrow victory for her second Ladies Challenge win of the year.

A Street was could have been called Spec Z06 if it wasn’t for the Porsche Cayman shared by Yury Kholondyrev and William Petrow. The racing reflected that near-spec status with close racing throughout the field. The entire 20-driver class was covered by a difference of 2.473 seconds between first and last, making the average margin between drivers just 0.130 second. Bill Bostic jumped out to the early lead and held it through Saturday as his co-driver, John Wolf, jumped to second ahead of Kholondyrev. Sunday morning brought change as Kholondyrev found 0.873 second to jump to the lead, forcing Bostic to second place. Josh Luster cleaned up from his Saturday morning runs and continued to find time to climb to the third step of the podium, just 0.035 second behind Bostic. David White, Ryan Finch claimed the fourth and fifth place trophies respectively and John Wolf fell to the sixth and final trophy as he was unable to improve on Sunday morning without collecting cones.

The 12 drivers of Street Touring Sport battled for just four trophy positions. Kevin Gu jumped to the early lead with co-driver Kenneth Tsang just 0.008 second behind. In the afternoon, Rich DiMarco jumped out to a 0.600-second lead and didn’t look back. DiMarco claimed the class win by 0.443 second over a charging Tsang. Gu claimed the third step on the podium while Todd Kunze took home the fourth and final trophy. DiMarco’s domination continued through the Super Challenge as he faced super drivers and cars, finally facing Super Street winner Erik Strelnieks in the final round. In what looked like a David and Goliath matchup, DiMarco and the Mazda Miata took down the Acura NSX of Strelnieks for the event’s top honors.

Despite being the slowest of the Street classes, H Street brought some of the closest competition in Oscoda. Philip Mitchell jumped to an early lead on Saturday morning which he held until Sunday morning when Peter Ling found the time to take the top spot by 0.306 second over Mitchell. Brandon Hagaman claimed the third and final trophy position, just 0.006 second behind Mitchell. Alex Piehl finished fourth, missing out on a trophy by just 0.100 second.

Street 4 has grown this season with the growing popularity of the Honda Civic Si in G Street and the BMW M3 in F Street. Five trophies were awarded in this 16-driver class. Eric Simmons emerged victorious in his Honda Civic Si, 0.366 ahead of Neil Britton in a BMW M3. Lance Keeley was only 0.194 second behind Britton with Ido Waksman another 0.265 second back in fourth. Jason Tipple claimed the fifth and final trophy, just 0.064 second behind.

Complete results from the 2019 Tire Rack Oscoda ProSolo can be found here.