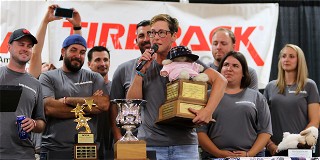 One Down, One to Go -- The first set of Tire Rack Solo® Nationals winners have been crowned.  Thursday starts the second half of competition with a whole new set of drivers competing for another round of championships to be decided by the end of Friday. Keep track of all the competitors and Solo Nats action online with live timing and audio at http://sololive.scca.com/.  And check for frequent updates at https://www.facebook.com/sccaofficial/ and https://www.facebook.com/solomatters/.

Honored Guests -- Wednesday night was the first of two Tire Rack Awards Ceremonies, conducted at the Lancaster Events Center in Lincoln, that will take place this week.  The first set of new champions received their awards.  And as SCCA does each year, a couple members received special honors.

The Solo Cup was awarded to Steve Hudson of SCCA’s Lone Star Region. The Solo Cup is presented to Sports Car Club of America® members who have made an outstanding contribution to the Solo events program. Winners are selected by the Solo Events Board from nominations submitted by the membership at large. Hudson has served as a Solo Events Board (SEB) member, SEB Chair, Chair of the Junior Driver Program revisions committee, and is a longtime contributor to the sport at both the local and national level

The 2018 Driver of Eminence is Tom Ellam from SCCA’s San Francisco Region. The Solo driver who has consistently demonstrated excellence behind the wheel, and an exemplary degree of sportsmanship, dedication and unselfishness receives this honor. The winner is selected by the Solo Events Board from nominations submitted by the membership at large. Ellam is a championship-winning driver and car builder who has given tirelessly to help others with their cars or driving talents.

The Johnson Spirit of the Sport Award was presented to “The Eh Team,” a group of competitors from eastern Canada. This recognition goes to Solo community members who bring the spirit of fun to their fellow participants, as symbolized by the message engraved on the perpetual award: "Johnson Spirit of the Sport Award, presented annually by the Royal Order of the Sheep to a member of the flock that upholds the spirited virtues of Fun, Camaraderie and Tomfoolery.” This award is named in honor of the inaugural recipient, the Exalted Grand Shepherd, Roger E. Johnson. The award is selected annually by the previous three recipients.

And finally, the Dick Berger Perseverance Award went to Bob Barone from the New England Region. The award recognizes someone each year who is undaunted by limited success over many National Championship events, but keeps coming back to enjoy the camaraderie, community, and hopes for a trophy in competition. Barone, who competes in the A Modified class, has come to Nationals 32 times with only one trophy.

When asked to compare his second-place finish at the 2018 Solo Nationals to his Runoffs win, Seltzer said, “If it were any easier, they would call it road racing.”

Photo: “The Eh Team,” a group of Solo Nationals competitors from eastern Canada, picks up their Johnson Spirit of the Sport Award