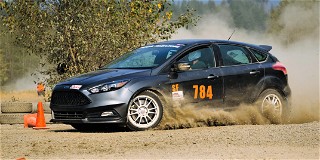 SNOQUALMIE, Wash. (Aug. 22, 2018) -- The 2018 DirtFish SCCA® West Coast RallyCross® National Challenge stormed into the Cascade Range foothills in Washington to determine the fastest West Coast RallyCrossers. The battlegrounds for this competition were the tailored surfaces of DirtFish Rally School, and they did not disappoint with three separate courses over a two-day race that presented many driving challenges.

Saturday started with a counterclockwise course featuring several surfaces from dusty tarmac to grippy dirt to gravel. After everybody in all three run groups got their laps in, the entire operation moved further out in the facility to a wooded area with looser soil. This course was shorter and tighter with less grip, making for a completely different set of challenges. Sunday morning’s course moved back to the same area as Saturday morning, but reversed direction and was slightly altered, making for a more technical course to negotiate.

Between every run group, DirtFish spoiled participants with professional course grading and watering. Ruts and rough terrain were nowhere to be found, allowing racers to attack with confidence backed by trustworthy grip.

Stock AWD saw a few Audis and a whole mess of Subarus have drivetrain dominance defeated by a mid-‘90s Jeep SUV. In a very competitive race with the first six places separated by about half a minute, Geoff Clark and his Jeep Grand Cherokee came away with the win by just .24 seconds. Next came Charles Morrill in a Subaru Legacy sedan, followed by Brandon Burgler in third another 4.7 seconds back in a Subaru Impreza.

Prepared AWD was another very tight race with second through seventh separated by less than 22 seconds. First place went to Ron Binckley, way out in front by 17 seconds in his Subaru STi. Michael Honn took second in his Subaru 2.5 RS with Eric Holcomb coming in an impressive third just a few seconds back in his Subaru Outback. Traver Phillips took fourth in a Subaru WRX wagon, just barely shouldering his way past Brian Judy who was .11 seconds behind in a Subaru WRX STi.

Modified AWD was a Mitsubishi versus Subaru melee featuring quite a few very impressive builds. Kory Nelson debuted a new-to-him Mitsubishi Lancer and found himself at the top of an intensely close race, coming from 10 seconds back to take first by just .17 seconds over Alexander Mock in his Mitsubishi Evo 8. Jeffery Olmstead rounded out the top three in an Impreza. Ryan Hodgkinson took fourth in his WRX wagon after a close battle with stage rally veteran Matthew Dickinson who picked up 11 cones in his WRX STI.

Modified RWD was a diverse field with 13 entrants from three states, one province and two countries in six different marques from three separate decades. Brianne Corn mopped up again, taking the victory by 10.5 seconds after winning the RallyCross event just last weekend at Watkins Glen International. Norman Hayton, always a fast force to be reckoned with, came down from Canada to take second in his BMW 323i. Peter Dozeman, co-driving with Corn, was a little more than 20 seconds out in third. DirtFish tech Kip Tischer was a mere 2.5 seconds back in fourth in his BMW 318ti. If there were awards for crowd favorites they would go to two cars in this class: the always-sideways Toyota Corolla driven by Edwin and Amber Tafoya, and the Mercury Bobcat woodside wagon piloted by Matt St. Onge.

Stock RWD was a small but interesting field. Austin Dowda took first in a Nissan 350z after trading in his fan-favorite Honda Civic wagon that claimed second in Prepared All-Wheel Drive last year. Alan Dorman was second in a Ford Mustang and Naomi Watnick came in third in her Ford Merkur XR4Ti.

Stock FWD was a brutally tight Ford versus VW battle with the first three spots decided by cone counts. Chris McMillan ran an error-free weekend and took first in a Ford Focus ST with a total time of 13:54 flat. Charles Graham, co-driving with McMillan, picked up two cones, one on his last run, and finished 2.2 seconds back. Ryan Baldwin drove his Volkswagen GTI to third place, picking up two cones in his last two runs to finish 3.6 seconds behind first.

Modified FWD had a similar number of Fords, but the competition was a Dodge instead of VW. Experienced stage rally driver Christopher Miller piloted his caged Focus to first with Geoff Thomas in another Focus 17 seconds back in second. Veteran Pacific Northwest RallyCrosser Alan Flemming, always very competitive while arguably spending the least money, brought home third in his Dodge Neon, six seconds behind Thomas.

Photo and Words by Greggar Helgeland