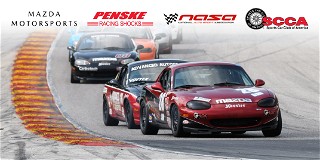 IRVINE, Calif. (Aug. 14, 2018) -- Since its inception nearly 20 years ago, Mazda’s Spec Miata (SM) has grown to become one of the most popular and competitive classes within the Sports Car Club of America and National Auto Sport Association. The low-cost, high-excitement platform has drawn thousands of racers, and that will continue with today’s announcement that Mazda Motorsports and Penske Racing Shocks have teamed up to produce a new, spec shock package to enhance the SM racing experience in the coming seasons.

In a recent dry- and wet-weather session at Carolina Motorsports Park, pro drivers Joel Miller, John Dean and Randy Pobst tested Penske’s race-engineered shocks head-to-head with offerings from several other brands over four days. Four different versions of the Mazda Miata were tested, and runs were made on Toyo and Hoosier tires. Test drivers didn’t shy away from curbing, running the cars to simulate qualifying and long runs. In all, 72 different combinations of driver, damper and tires were tested.

Results show the new Penske shocks to be similar in qualifying lap times compared with shocks currently used by the SM field. But on overall pace, particularly starting on the fifth lap, the Penske product showed brilliance. And on 30-minute to hour-long runs, where the current spec’s lap times slowed by three-plus seconds on the high-wear track surface, the Penskes never fell off to even two seconds compared to qualifying lap times. An in-depth look at the test findings is available at the Mazda Motorsports website.

“The Penske Racing Shocks package is a major step forward for Spec Miata, upgrading the cars from an underdamped street shock to an uncompromised race piece intended solely for the track,” Pobst said after testing. “The shocks allowed the tires to maintain more grip because the suspension worked properly, rather than constantly crashing down on the bump rubbers. With every car, driver, tire and track condition, the Penske provided superior control."

Miller and Dean added that the Penske shocks had a ride quality that was very, very good. The damper had great compliance and soaked up exit curbing, and did not skip the car. Tire life had a predictable, linear and subtle fall-off because of good compliance. Tires also had a large window of operation and never gave a knife-edge feeling at stint’s end.

Josh Smith, Mazda Motorsports Technical Specialist, noted that the “street shock” currently used in SM is not entirely ideal for racing. The off-the-shelf shock, while cost-effective, was not initially designed to handle the spring rate on race cars and sometimes has trouble “dampening” movement. This causes the suspension to bottom out, which impacts wear-and-tear on other components of the car, including tires, hubs, bearings and subframes.

“The Spec Miata community will receive tremendous value from the new Penske shock in terms of drivability, consistency, improved areas of compliance, longevity, and great long-term value for the cost,” said David Cook, Business Development Manager for Mazda Motorsports. “This new shock doesn’t raise the performance of any single SM generation car over another. What it does accomplish is to enhance the SM platform as a whole, and bring in a shock partner interested in servicing customers with trackside support and contingency awards.”

According to Aaron Lambert, Penske Racing Shocks Director of Competition, another round of testing and honing of the new shocks will be conducted next month. But ultimately, Penske Racing Shocks will provide an offering that competitors -- novice or pro -- can drive consistently. With the new shock comes a new upper mount that uses a spherical bearing and a new bump stop designed specifically for the application. Issues caused by riding on bump stops will be eliminated, and stress to other parts minimized so a race car’s longevity can be maximized.

The new shock price will be set at $198.74 apiece, with the complete upper mount/bump stop kit retailing at $249.90. Parts will be available exclusively through Mazda Motorsports with a total cost for conversion; including four shocks, top mount, bump stops and lower spherical mounts for less than $1,050. Unlike the current Spec Miata shock, the Penske will be tamper-proof, and rebuildable through Penske at $100/shock. It is recommended that shocks be inspected by Penske after 100 hours of track use to determine whether a rebuild would be valuable.

“Penske Racing Shocks is the world leader in suspension technology and proud to be the majority supplier in F1, NASCAR, IndyCar, IMSA DPi, NHRA Pro Stock, and now Spec Miata,” Lambert said. “With such a rigorous schedule, high volume of competitors and demand for equality, the Spec Miata series is a perfect platform to show off performance, reliability and repeatability, which is why Penske Racing Shocks is honored to be part of this racing class.”

Both NASA and SCCA have approved the new Penske shock for SM competition beginning Jan. 1, 2019. It is anticipated the new shocks will be available starting November 2018 through Mazda Motorsports.  The new shocks will not be immediately required for NASA or SCCA competition. Both sanctioning bodies will communicate with competitors at a later date regarding a sunset timeline for the shock package currently in use. For the SCCA, both the current Bilstein and new Penske shock packages will be eligible in 2019, with the Penske shocks mandatory for the 2019 SCCA Runoffs. The 2020 SCCA U.S. Majors Tour program will follow suit in requiring the Penske package, with continued eligibility for the Bilstein shock at the Regional level.

About Mazda Motorsports
Mazda Motorsports boasts the most comprehensive auto racing development ladder system of any auto manufacturer in the world. The Mazda Road to 24 (#MRT24) program offers a number of scholarships to advance drivers up the sports car racing ladder, beginning with the Global MX-5 Cup series and culminating with the Mazda Prototype team. The Mazda Road to Indy (#MRTI) is a similar program that includes Mazda-powered categories of USF2000, Pro Mazda and Indy Lights. In grassroots road racing, more Mazdas race on any given weekend in North America than any other manufacturer. Follow all of the latest news at MazdaMotorsports.com, @MazdaRacing on Twitter, and MazdaMotorsports on Instagram and Facebook.

About NASA
NASA was founded in 1991 on the premise of providing motorsport competition programs that allow owners of both racecars and high-performance street-driven vehicles to enjoy the full-performance capabilities of their cars in a safe and controlled environment.

About SCCA
The Sports Car Club of America®, Inc., founded in 1944, is a 67,500-member motorsports organization that incorporates all facets of autocross, rally and road racing at both Club and professional levels. With headquarters in Topeka, Kansas, the SCCA annually sanctions over 2,000 events through its 116 Regions and subsidiary divisions. Much of the SCCA's activities are made possible with support from the following Official Partners: Chevrolet, the Official Truck of the SCCA; Hawk Performance, the Official Brake Products of SCCA; Mobil 1, the Official Oil of SCCA; Sunoco, the Official Fuel of SCCA; and Tire Rack, the Official Tire Retailer of SCCA. To learn more, please visit www.scca.com.