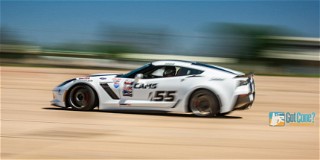 Commenting on the weather is usually a cliché cop-out in writing event recaps. That’s not the case with this past weekend’s Tire Rack Lincoln Championship Tour. It was HOT. We’re talking record temperatures, before you even factor in surface temperature on the concrete. Everybody should just be thankful it wasn’t asphalt.

Considering the number of past National Champions who showed up to the capacity event, there were not as many close battles as one might expect. But in Super Street there was a battle between Alberta and California, with the Canadians letting the American have the win on Memorial Day. Monty Pack edged Ambrose Fung by 0.012 second, with Ambrose's co-driver Ryan Clark only 0.185 second behind in third.

E Street had an impressive 20 entries, with a deep field of strong drivers in Mazda Miatas and Toyota MR2 Spyders. The sweeping courses appear to have favored the Miata, as Bartek Borowski took home the win in a close battle against Matt Waldbaum, also in a Miata. It was over a second gap to several of the country's top Toyota pilots with Andrew McGibbon, Paul Brown and Eric Peterson claiming the third through fifth positions. Charles Matthews claimed the final trophy in his Mazda Miata in sixth.

In Super Street R, a lone Dodge Viper broke up the all-Corvette party in grid. Matthew Braun took the win by 0.634 second over Sam Strano, with Brian Peters another 0.065 back, all in Corvettes. Jason Rhoades claimed the fourth and final trophy position in his Viper.

An impressive eight ladies came to play in Street Touring Roadster Ladies, but it was a one-woman show with Laura Campbell taking a commanding 3.171-second victory in a Mazda MX-5. Maegan Contreras took home second in the lone Honda S2000 in the class. Jen Fox claimed the third and final trophy position, just 0.035 second ahead of Sara Odioso.

A combined 17 CAM cars were present between the Sport and Contemporary classes. Mike “Junior” Johnson, in a Chevrolet Corvette, claimed a decisive 2.633-second victory in CAM Sport over Joey Green in a Shelby Cobra. Brandon Nelson and Clay Turner claimed the remaining trophies. On the CAM Contemporary side, W B Sephus led by just over 0.500 second after Sunday and stretched that margin out to 1.288 second to take the win over Keith Lamming. Robert Gosda and Raleigh Boreen claimed the remaining trophies in third and fourth respectively.

Complete Results from the 2018 Tire Rack Lincoln Championship Tour can be found here.