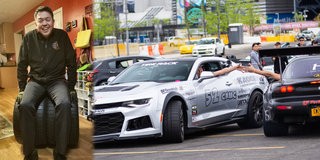 Background: Danny Kao has been an IT professional for the last 30 years. The first ten years he worked as an application programmer, while the next twenty were as the head of IT for three different, small biotech companies. Now he is an application analyst for a medium-size vaccine company. He has been married (sorry ladies) to his wife, Jody Kao, for the last 32 years, and they have two daughters together, Audrey and Brooke. He states that none of them like cars. He got into autocross because the Miata he bought for $1300 couldn’t pass tech for a local track day. He was told to try autocross by the track guys, so he did. After attending two more track days, he found autocrossing to be more fun, and has been at it ever since.

JH: Danny, thank you so much for agreeing to do this interview. We have known each other for a while now, and I have a lot of respect for you and your approach to the sport and life. I feel that a lot of that approach is from your early years, and some of the things you experienced growing up. Would you be willing to share with us a bit about how you grew up, and how you ended up moving to America?

DK: Yeah, for sure. My family was originally from China, but moved to Taiwan when my parents were still pretty young. Then, in 1979, the US recognized China, and everyone was worried that war was looming with China and Taiwan. So, any kids 14 or younger were sent out of the country, usually to the U.S. if they could be, to avoid being drafted into army. My mom had moved to the U.S., after separating from my dad, so I came to the U.S. to live with my mom. I had a different childhood. My dad came from a poor family, while my mother’s side was fairly wealthy. Dad became a millionaire by using grandfather’s connections. So, in Taiwan, I grew up in a wealthy family. My mom and dad were doing their thing during this time, so my brother and I spent most of the time with grandparents. By the time I was 14-15, we had gone from a rich family to nothing due to my dad partying and such. It was odd. When I was younger, I got to meet a lot of well-to-do people, dignitaries and their kids were friends, but by the time I was in junior high we didn’t have anything, so it was very different. But because of that, I learned that you can always make things work out. The wife says because of how I grew up, that I am fearless. I do things that are kinda odd, or risky, but I always have a strange confidence things will work out.

JH: I have heard rumors that you are very passionate about the sports or hobbies you become involved with. And that you have always been that way. What are the other sports/hobbies you have been involved with, and how far down the rabbit hole did you go with each of them?

DK: Oh, jeez. I am from Taiwan originally and baseball was really popular there. I played baseball every day growing up. When I was 14, I moved to the states where basketball was more popular. So, then I would play basketball every day. My brother and I got pretty good! He played with the NBA in Taiwan, and is a broadcaster with them now. I could shoot better than him, but he could dunk easily, and I can’t! When I got married, I started running marathons and ran every day. Then I got into golf. For a stretch of three years, I would play 500 rounds of golf every year. And then after golf, I got into motorcycles. Raced for a few years. But racing them was a bit scary, so I started bicycling and I rode a bunch of miles. Autocross is what I do now, and I go to as many events as I can.

DK: Ha, ha … of course you have to ask that! I am currently on car number 111. I have had 130 motorcycles, and I stopped buying those in 2005. The most bikes I have had at one time was 21. Jody has known about all the vehicles, but when I had 21 motorcycles at one time, she didn’t necessarily know when one bike got swapped out for another. Most of the bikes I owned, maybe 80 of them, were to buy, fix, ride and then sell. Most of those I would only own for a few weeks. I would usually end up breaking even, or maybe taking a small $50 loss on them. So, I always saw it as a cheap way to experience all those different bikes. 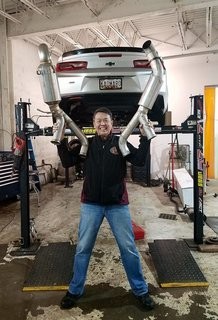 JH: Knowing how many cars you have owned, and thus how many autocross classes you have competed in, which has been your favorite thus far?

DK: The most intense competition I have had was in CSP. Every race, you had to really go for with intensity. There is no letdown there. You have to be ready to go at all times. Most fun though was F125. The big reason there was, at the time, 15 to 20 locals running in the class. We were a bunch of castoffs, and we were out having fun. If someone broke something, all the others would help out to fix it. We just had a lot of fun. That was from 2009 to 2011. The reason karts were so big was because of Julian and Brian Garfield, though. They are the ones that kind of created that group and made it fun.

JH: You are known as an extremely fun, lighthearted, yet fierce competitor. What advice would you give to all of us to help us take the “Danny Kao” approach?

DK: Like everyone else, I came in because I wanted to drive. When I realized I could mess with cars, and drive, I really got into it. This fit me so well. I could enjoy the car building part and then swapping cars out for others. The racing wasn’t really the focus. I just loved getting out there and driving. I cared more about having a good time, the fact that I can win was just a bonus. But it wasn’t the focus. However, in 2012, I bared down and tried to be more serious about it and get better. When I did that, I found that the events got less fun for me. I lost focus on having a good time. The winning and losing of a race started dictating how I should feel. But that shouldn’t be how it goes. If I lose a race, I am not a loser. If the result of the race dictates how I should feel, that is not what I want to be or what I want to do. But when I got into a mindset where I didn’t care, I didn’t really do well then either. The light bulb went off after 2015, and I learned to take this approach: Prepare myself and the car for the race the best I can. Know where I am racing, the surface, and what changes I should make on the car, and get them done before getting there. Once preparations are done, and I get on site, all I can do is walk the course, and just focus on the 3 minutes of driving. When I pull up to the start, I take a deep breath. If I am still feeling nervous, I look for the prettiest thing I can find. Car, person, or something funny. Something enjoyable. My mind will wander off, and then my nervousness is gone. Last couple years, I am not nervous at the line. My mind is clear. Then it is just stay ahead of what is going on and keep intensity up the whole course.