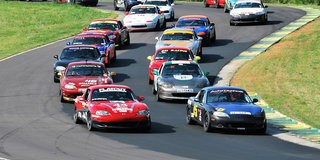 For 2018, Mazda Motorsports is making an effort to put more people on the ground at the events Mazda racers attend, starting with Southeast Conference SCCA U.S. Majors Tour dates. David Cook, Mazda Motorsports Manager of Business Development, said the initiative has been well received so far.

“It’s starting out better than expected,” said Cook. “Our hope was to not only support the Southeast racers, but learn from the racers and apply those teachings to the overall program. The Southeast Conference racers’ knowledge, experience and openness with us have already led to improvements in pricing, sourcing new products and more.”

Spearheading this year’s initiative are Cook, Mazda racer Steve Strickland, and Josh Smith, Mazda’s newest hire tasked with building Mazda Motorsports’ competition parts selection and being a liaison between racers and the manufacturer. After the first couple 2018 race weekends, Smith said a lot has been learned.

“We thoroughly stocked the trailer based on sales and input from teams and racers and myself to get a better inventory of what we’re going to need at the track,” Smith explained. “We’re working on setting up a better footprint for presence with pop-up tents, and we’re getting the trailer wrapped so it’s easier to find at the track.”

Along with advice, other at-track services offered by Mazda include access to the factory Mazda scan tool to provide better tech support at the track, and a rotary compression gauge. For the broader Mazda racing audience, Smith is working on a signature series exhaust for NA and NB Miatas that would be Spec Miata compliant but would also work for IT, Touring or STL. Constructed of 409 stainless steel, it will fit with the tunnel notch and have the best ground clearance. Racers will also be happy to know that Mazda Motorsports provides lunch Saturday, where the Mazda folks are on hand to answer questions.

“David and I are of the opinion that we want this program to spread nationwide so we get a better idea of what our racing base and customer base is looking for,” Smith stated.

Beyond car prep, Mazda is also making available driver coaches at some events. Andrew Carbonell was on hand at NOLA’s Hoosier Super Tour event, and Tom Long will be on hand for the Hoosier Super Tour visit to VIRginia International Raceway.

To learn more about this and other Mazda Motorsports activities, visit www.mazdamotorsports.com.