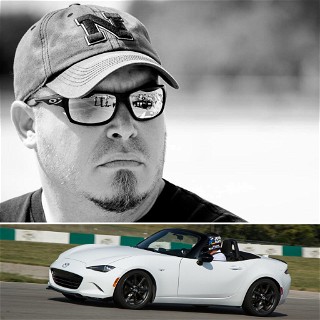 During our last meeting, Heyward Wagner proposed doing a Take 5 on me as a way to introduce myself and my new positions within the SCCA, as well as my thoughts and plans for each. So I asked him to come up with the five questions for me to answer, and I would put it all together. So, without further ado, I present the latest Take 5: With John Hunter.

HW: There are racers who see cars as a tool to do a job, and there are car people who enjoy and celebrate the emotional connection to a, or several, cars. Which are you, and why?

JH: Definitely the latter. I have always had a passion for cars and driving. Growing up, all my toys were car based. All the shows I watched were car based. I drew cars. If it didn’t involve a car, or have a car in it, I probably wasn’t interested. As a competitive person, though, I understand the thought process of a car as a tool. But to me, the car is so much more than just a tool. I want more than that. I want a car that rewards you with a visceral driving experience to be enjoyed despite venue. I want to enjoy the process of driving and immerse myself in it.

HW: You are now the third or fourth person to take the SoloMatters reins- how do you view SoloMatters, and what do you hope to contribute to it?

JH: To be honest, before taking the reins, I had no view of SoloMatters. The good that comes from that is I have no preconceived notion of what it should be from what the past iterations were. My vision for it going forward is to be something that people actually look forward to reading, and even sharing with those outside of the sport. While it will obviously be a source of news consisting of rule changes, event dates, results, and general info, I want the focus of SoloMatters to be on the people and the culture of our sport. This sport has such an interesting mix of people that do some amazingly cool things, both inside and outside of the sport, and I feel that is something that should be shared.

HW: You have also taken over the lead of the Starting Line School. What do you see as the biggest potential benefits of this program for the Club and regions?

JH: The biggest, for both the Club and the regions, is the one I think gets lost in translation most of the time: New members. While the school is excellent for the novice or even experienced autocrosser, the package as a whole is driven by the thought of getting people in and getting them hooked on #funwithcars. The free membership they receive with the school gets them in the Club. Giving them a free entry to a local event gets them to come back. Giving them free entries to both a National event for autocross and Track Night in America Driven by Tire Rack, lets them explore the other areas and levels at which they can participate, giving them more reasons to stay.

HW: You have also helped out some with the Track Night program. What is your advice to autocrossers who are curious about doing a Track Night?

JH: Do it. Bang for the buck, you will be extremely hard pressed to find a more cost-effective way to get on track. I have done HPDE (High Performance Driving Event) instructing with a few different groups through the years and can say that Track Night in America is also one of the safest, yet laid back, places to dip your toe into the lake that is HPDE and above. I mean really, what better way is there for a driving enthusiast to spend a weekday night than to attend a fun-focused, inexpensive time ON a race track?!

HW: I know you are a guy who loves to have a car for every task- to race, to commute, to just look cool- is there a harder question for you to answer than, “If you could only have one car…” and as a follow up, “what would it be?”

JH: I would actually love to have one car that does all those things. It would be so much cheaper! However, my car A.D.D does not allow for that kind of simplicity in my life. And that question has always caused me to lose hours of my life every time it has been asked. It is probably harder to figure out than what I want to eat at a Mexican restaurant. So many choices that are essentially the same, yet each providing enough change in flavor and eating experience that it becomes almost impossible to decide which to get. There is an old saying that goes, “variety is the spice of life.” And thus, in regard to both life and Mexican food, I would say I definitely prefer it spicy.