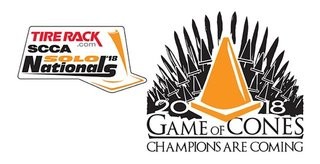 We are excited to announce Vivek Goel as the 2018 SCCA Solo National Championships West course designer. Goel is from Austin, Texas, and started autocrossing in 2004, with his first trip to Nationals being in 2008. He is a member of the Spokes Region and served as their BoD VP from 2009 -2016. He has finished on the podium at both the National Championships and the Pro Finale, although some may know him for winning the Grassroots Motorsports Talent Show whilst absolutely shredding on his guitar. We sat down with Goel to get some of his course designing background and to talk about the philosophy and processes behind his designs. We also asked him for his thoughts on the current state of course design overall.

JH: Which year or years have you designed a course at Nationals?

Vivek Goel: I designed the East course in 2014.

JH: When did you start designing courses, and what lead you to wanting to do that?

Vivek Goel: After my first trip to Nationals in 2008, and seeing the courses there, my interest really bloomed from that. I hadn’t really seen courses like that, due to being on smaller lots and so forth. I wanted to try to bring those style elements and speed to my local region. Since then, I have designed a majority of the local courses and every Texas Tour since 2012.

JH: What would you say is the philosophy behind your designs?

Vivek Goel: I have three things I try to focus on when designing courses. First, I would say my style is to not make it an art project. I like to use as few cones as I can, while still making the course easy to read. Second, I want to make sure it drives well for all. I try to make sure there is a balance to the elements. Speed maintenance vs. power, and a proper dose of risk vs reward. Third, I like to test assumptions. The course I designed in 2014 was designed with the thought of testing the old assumption that cutting distance is always better than higher speed.

JH: Can you walk us through your process when designing a course?

Vivek Goel: I first try to establish a good flow for the course, then add in elements. I keep a catalogue containing drawings of shapes and lines that I like to draw from. When I am out driving and I go around a corner, there might be a shape that I want to emulate. Or I might see another shape just out and about that I think would be fun to implement, so I add those to my catalogue to draw from. I also tend to go backwards. Once I establish my flow, or line, I start adding elements from the finish back. After putting an element in, I try to imagine what would be a great element to lead into what I just did. So, I tend to start at the finish and end at the start.

JH: Lastly, I am sure some have noticed that courses seem to be getting faster in terms of average speed on the course. What are your thoughts on that? Is it a function of the cars themselves being that much better, or has there been an overall philosophical change in course design? Or both?

Vivek Goel: I think there are a few things in play here. Cars, yes, they are more capable now. I also think the tires we run on are getting much faster. I know that the Stock, or now Street, classes have switched from the R comps to street tires, but the tires have really progressed. But I do think that the courses have shifted to a higher average speed, speed maintenance style. I think it is the perception that people want that style of course. I do try to balance the speed though, as that type of course benefits some cars more than others.