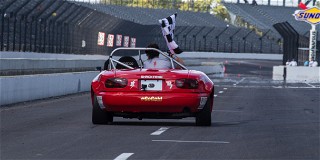 Eric Prill was named the 47th recipient of the RRDC Mark Donohue Award. This unique award is presented annually by the Road Racing Drivers Club for outstanding performance, competitiveness and sportsmanship during the amateur Sports Car Club of America® National Championship Runoffs®. It is voted on by RRDC members attending the Runoffs and/or viewing them live on the Internet.

In his 16th attempt to win the Runoffs, Prill pulled off his first victory driving his F Production MaxtonsFight.org/JPM/Hoosier Mazda Miata at the 54th SCCA® Runoffs at Indianapolis Motor Speedway (Sept. 25-Oct. 1, 2017). The win gave him his seventh Runoffs podium finish, along with four runner-up and two third-place finishes from 2009-2016.

Qualifying on the pole of the 42-car field, Prill was passed for the lead in turn 1, but quickly regained it and was ahead by five seconds when a full-course caution flag flew on lap 7 of 18. With nine-time national champion Joe Huffaker on his heels, Prill made a quick restart and held the lead. A second full-course caution flag came out on lap 12, and again his lead evaporated. Executing another excellent restart, he watched the second-to-fourth-place racers battle for the podium behind him as he cruised to a two-second win.

"Each time the yellow came out, I just thought 'are you kidding me?' But, I believed I had the pace to get away as long as I could be out front after the first couple of corners," recalled Prill. "Having a guy like Joe Huffaker on your bumper for three separate starts really puts the pressure on."

Prill, who completed SCCA Driver's School in 1995 and is a four-time SCCA U.S. Majors Tour Conference Champion, was thrilled with his first win. "When I started racing more than 20 years ago I never imagined that I might finish on the podium at the Runoffs, let alone win a National Championship," he said. "It was never my goal back then. Racing has always been about spending time with my family and my friends. Over the years, I went from being a guy that got lapped at the Runoffs to standing on the podium at Indy. The transformation was because of the advice and support of all those people."

The award is named for RRDC member and former president Mark Donohue, who won his first National Championship in the SCCA E Production class in 1961, and then went on to become one of the U.S.A.’s greatest racing drivers. He won the Indy 500, the Can-Am Championship, three Trans-Am Championships, and the IROC Championship.

"I've spent my entire life around racing, and knew about Mark Donohue at a young age," Prill added. "My dad actually worked for American Motors in the 1970s, so the Penske Javelin was an iconic car in our house. Years ago, I read ‘The Unfair Advantage,’ and I think it made my program better. I understand his significance in both SCCA and motorsports history. It's very humbling to be honored with the award bearing his name."

Prill, who serves as the Vice President and COO of SCCA, will be officially presented the award at the annual RRDC members’ dinner at the Rolex 24 At Daytona on January 24.

RRDC president Bobby Rahal, a Runoffs champion (1975 Formula B) long before he won the 1986 Indianapolis 500, emphasized the RRDC Mark Donohue Award is “about personal spirit and performance behind the wheel. Those qualities are more important for this award than winning the race," he said. “The RRDC honors Eric not only for his outstanding drive to win, but for his perseverance. His passion for the sport he's embraced for so many years, as a racer and an SCCA employee, has never faltered."

Every year, the RRDC Mark Donohue trophy is an engraved glass top mounted on a special, racing-experienced wheel, provided by an RRDC member. This year’s wheel was donated by Corvette Racing Program Manager Doug Fehan. It comes from the 2016 Rolex 24 At Daytona-winning Corvette No. 4 driven by Oliver Gavin, Tommy Milner and Marcel Fassler, in the closest finish in Daytona history, .034 seconds. All six Corvette Racing team drivers, including Jan Magnussen, Antonio Garcia and Mike Rockenfeller, in the No. 3 car, signed the wheel.

About the RRDC:
The Road Racing Drivers Club was formed in 1952 as a way to give champion drivers a say in their sport, particularly in the areas of safety, and has evolved to serve the future of road racing by mentoring new drivers on both amateur and professional levels. The Club’s membership includes leading industry professionals, race officials and motorsports journalists, in addition to prominent racing names.

The RRDC presents three annual awards: the Phil Hill Award, the Mark Donohue Award, and the Bob Akin Award, and supports the Team USA Scholarship, which has been assisting young Americans in the early stages of their careers since 1990. The RRDC also honors icons of the sport at its annual dinner at the Long Beach (Calif.) Grand Prix. Honorees have been Dan Gurney, Parnelli Jones, Roger Penske, Jim Hall, Brian Redman, Mario Andretti, Bobby Unser, George Follmer and Emerson Fittipaldi.

Membership in the RRDC is by invitation only. For more information, visit www.rrdc.org.

Photo: Prill and his wife, Robin, head out for a victory lap at IMS during the 2017 Runoffs.