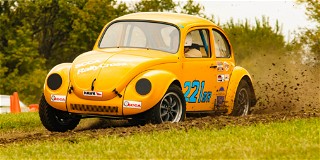 TOPEKA, KAN. (Oct. 22, 2017) -- The 2017 DirtFish SCCA® RallyCross® National Championship concluded with many tight races and new winners. On Sunday morning, competitors got to work under clear skies and light wind, brushing off the severe thunderstorm the night before. Rather than cancelling the runs affected by the weather, the SCCA moved them to Sunday morning to ensure all competitors got as much seat time and fun as possible. After Saturday’s runs were completed, the course was reset to combine both areas of Saturday’s competition, creating a longer course for competitors to enjoy. The sun dried the terrain throughout the day, giving racers more grip and speed right up until their last runs.

Doug Leibman and his 1971 VW Super Beetle took the win in Modified Rear-Wheel Drive over John W. England. The margin of victory was 3.616 seconds with Leibman keeping things neat and tidy with no cones while England picked up three for the weekend. Leibman commented, “The VW has been a fan-favorite, but not for its speed. We got it competitive this year with a new drivetrain, which makes it so much more rewarding to drive knowing that people can root for it to win, not just be a favorite car. This win is spectacular, though it’s unexpected against competition as tough as John.”

Modified All-Wheel Drive was a tight race through the last run. Scott Banes and his Subaru Impreza had enough speed on hand to battle through four cones and still come away with the victory over Lothrop Withington IV and Eric Lassiter. Said Banes, “I just put a new motor in it two weeks ago and was all the way down in eighth at one point, but the rain and the mud were the equalizing factors that got me back up to first.”

In what can only be described as a show of force, Bret Hunter and his Honda CRX crushed the Modified Front-Wheel Drive class, winning by nearly 17 seconds over Aaron Miller in his Honda Civic hatch. It must be noted that Hunter picked up five cones on his way to that margin of victory. When asked how this was accomplished, Hunter responded, “You know how they say smooth is fast? Well, sometimes not smooth, which is how I drive in the mud, is fast. That, and the car came through in one piece, even though I thought it was going to break right up until the very last corner.”

Sean Grogan had a similar margin of victory driving a Toyota MR2 in Stock Rear-Wheel Drive, finishing 12.541 seconds ahead of Logan Altmyer in a Nissan 240SX. When asked what enabled such performance, he cited the mechanical work of car owner Daulton Hurst who recently replaced the entire rear subframe after the original failed with 440,000 miles on it.

Stock All-Wheel Drive went to ZB Lorenc in his Subaru Impreza, finishing well ahead of a pair of Mitsubishis driven by Jan Gerber and Jon Trudeau. When asked how he piloted his daily driver to victory, Lorenc was clearly more inclined to rib his competition saying, “Just as long as it’s not an Evo. This is my first win after eight nationals, so it feels pretty good.”

Stock Front-Wheel Drive was a nail biter that went all the way down to the wire. Matt Wolfe came out on top in the Ford Escort, winning by 1.007 over Donald Carl in his Plymouth Neon. Wolfe chalked his victory up to experience from last year, saying, “I knew the important thing was to stay clean and off the cones.” Indeed, Carl picked up a cone in each of his last two runs, handing the victory to Wolfe. After taking the win, Wolfe exhibited true RallyCross sportsmanship, offering to pull parts that Carl may need, but can’t find locally.

The victory in Prepared Rear-Wheel Drive went to newcomer Myles Goertz in a Mazda Miata, co-driving with third place finisher and car owner Kyle Nilson. With fewer than 10 RallyCross events under his belt, Goertz’s driving talents are unmistakable. When asked about his win, his response was every bit as positive and polished as a professional driver in front of national media cameras. It looks as though we are sure to see more of Goertz in the coming years.

In a tightly contested Prepared All-Wheel Drive race, Mark Macoubrie and his Subaru WRX STI took the victory by 2.236 seconds over Mark Hill. Warren Elliott was another three seconds back. Macoubrie attributed his win to a challenging but helpful group of competitors, citing the top four drivers within one second at the end of Saturday.

The victory in Prepared Front-Wheel Drive went to David Capesius, co-driving with Randy Patten in a Dodge SRT4. This was his first national win after two previous races. When asked how he captured first, Capesius explained, “A win wasn’t expected. But I have a lot of experience in the mud, so the rain on Saturday really helped my odds.”

While the weekend weather did present some challenges, in true rally form, the community pressed on regardless, making for a fun and exciting National Championship. The SCCA would like to thank DirtFish, as well as the participants and volunteers who made this event such a success. Start making plans now for the 2018 RallyCross National Championship taking place October 12-14 at the National Balloon Classic venue in Indianola, Iowa.