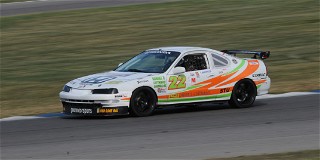 To win, Gee had to keep ahead of a charging Ray Huffmaster, of Clarkston, Michigan, in the No. 36 BlueForceStaffing.com/Hoosier Pontiac Solstice in the final laps. Mark Liller, of Aldie, Virginia, finished third in the No. 79 Angry Sheep Motorsport/Hoosier/Carbotech Dodge Neon SRT-4.

Gee, who had former IndyCar driver and fellow Mid-Ohio instructor Scott Harrington helping him this week, made up for a dismal 2016 Runoffs in which he didn’t complete a single lap.

“It would have been great to win last year,” Gee said, “but this year at this track is unbelievable. It still hasn’t sunk in yet and I don’t believe it will for a while.”

The eventual podium finishers all survived an exciting Turn 1 in which multiple drivers found themselves over-extending their grip levels and taking paths through the grass. After the first lap, the field settled into a race which would see positions swapped by racing and attrition.

“After watching all the races and waiting until Sunday afternoon to race we had a lot of time to study and look at everybody coming into one and must have thought about how many different scenarios and of course it didn’t go anything like we thought,” said Ray Huffman, the second-place finisher. “I was just glad to get through and make it into (Turn) 3.”

Ray Huffmaster’s son, Rob Huffmaster, of Clarkston, Michigan, made it through the start and pulled out to an early lead in his No. 24 BlueForceStaffing.com/Hoosier Honda S2000, but slowed to a stop at the end of the back straight on lap eight, allowing Gee to take over the lead.

“I was excited I got first,” Gee said of seeing the younger Huffmaster drop by the wayside, “but I knew I had to keep my nose down and hit my marks and try not to mess up too much and try to preserve the car all at the same time.”

Gee wouldn’t relinquish the top spot again, but it wasn’t without facing a charging Ray Huffmaster who closed to within five seconds at the end as the pair worked through traffic.

“I was trying to do math and drive at the same time which I’m not good at, so I just kept driving and looking in my mirror,” Gee said.

The third-place finisher, Liller started in eighth, made it through the Turn 1 confusion and took advantage of the attrition and hard racing to work up to third place. Once there, he had to fight off the hard-charging John Weisberg, of Webster, New York, in the No. 51 Redcom Labs/Mazda/Hoosier/Red Line/BERG Mazda MX-5 to hold on to the third spot.

“Towards the end of the race Weisberg was coming up on me,” Liller said. “He really closed on me and it was everything I had to keep him back.”

Filling out the top five was Joe Moser, of Wilmette, Illinois, the 2016 Runoffs winner in the No. 63 Hoosier/King Motorsports Honda Prelude.