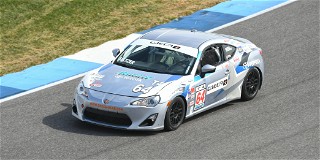 (Updated: October 1 at 10:30 p.m. to reflect a change in the winner in the official results)

INDIANAPOLIS, Ind. (Oct. 1, 2017) -- The Touring 4 (T4) class packed as much drama as they could into the 19-lap SCCA® National Championship Runoffs® Sunday afternoon at Indianapolis Motor Speedway. Action from the front of the 40-car field to the back kept spectators in suspense watching as the laps counted down.

Driving the No. 46 Jackson Racing BF Goodrich Toyota, Oscar Jackson, of Chino, California, crossed the finish line first, only to fall to fourth after reviews by the stewards of the meet.

Jackson, surrounded by Dynasty Racing drivers, started pole-position with Chi Ho, of Orlando, on the outside of row one, and the No. 64 BF Goodrich/OrecaGear/G-Loc Scion of Seltzer on the inside of row two. As the green flag dropped, Ho and Seltzer took advantage of being teammates, working together to overtake Jackson at the start. Ho dipped to the outside with Seltzer pushing him from behind.

Jackson braked deep to make Turn 1 with three cars flying off into the grass behind him. Ho went wide on the outside, hitting the curb before Turn 6. Seltzer dropped back to third with Jackson challenging Ho side-by-side entering Turn 6. Exiting the esses, contact from Jackson caused Ho to shunt off track and led to the penalty, and awarding the title to Seltzer.

The late-in-the-evening steward action didn’t dampen the accomplishment for Seltzer.

“It feels honestly fantastic,” Seltzer said after news of the decision reached him. “We put in a lot of really, really hard work. Our team has worked incredibly hard to get to this point in just one year of development of these cars. We perfected our driving in B-Spec, and then we took our car development with these cars and combined the two. The whole team running up front, all three cars.”

Czarny, in the No. 77 Fidelity Funding Mortgage Corp Scion, seized third-place position on lap two and started chipping away the gap Jackson and Seltzer created. It took Czarny eight laps to catch her teammate Seltzer. Drafting off Seltzer, Czarny passed for second on the front straight of Lap 17, but Seltzer quickly took his position back after Czarny hit lapped traffic in Turn 1. On the final lap, Czarny tried to make a move one last time for second, but lapped traffic trapped her again in a turn, allowing Seltzer to pull away to challenge for first. Jackson crossed the stripe with Seltzer right on his tail.

Czarny finished nearly three seconds behind the pair, making her the only female to visit the podium in the 2017 Runoffs.

“I want to say to all the girls out there wanting to pursue a career in motorsports that there is a place for you here,” Czarny passionately said. “Try karting, try cars, try SCCA Autocross, try everything. Follow your dreams because you belong here, too.”

The No. 3 Hoosier/SVLLC Mazda driven by Lance Stewart earned the Sunoco Hard Charger Award after moving from 25th on the grid to 12th at the checkered flag.