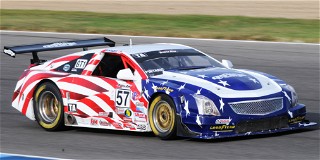 INDIANAPOLIS, Ind. (Oct. 1, 2017) – A tranquil morning in Indianapolis was shattered Sunday when the raucous GT-1 field took to the 15-turn, 2.592-mile road circuit at Indianapolis Motor Speedway to shake the ground and wake the neighbors during the SCCA® National Championship Runoffs®.

David Pintaric, of Canfield, Ohio, was on pole and brought the thundering herd to the Yard of Bricks to begin the 19-lap event. The No. 36 Stumpf Ford/McMahon Group/Lamers Ford Mustang of Cliff Ebben was to his left.

Coming into the Turn 1 braking zone, there was a little gap between Pintaric and Ebben; a gap Ryan McManus, in the No. 07 The McManus Agency-Goodyear Chevrolet Corvette, wanted to squeeze in to.  But he pushed a little wide, forcing himself and Ebben to the outer edge of the track and dropping them down the running order.

Meanwhile, Pintaric exited Turn 1 in the lead with the No. 12 Goodyear Jaguar XKR of Michael Lewis right behind.  A.J. Henriksen, in the No. 44 Engineered Components Company Chevrolet Corvette, was third and Jeff Hinkle, in the No. 9 Gogocreate.com Dodge Challenger SRT, was fourth.

Up front, Pintaric and Lewis put a gap on the rest of the field over the next several laps.  Meanwhile, Ebben found himself in sixth, but put his head down and started making up positions.  He closed quickly on fifth and fourth, then moved into third by lap four.

“It was kind of a big cluster going in to turn one,” said Ebben, the defending Runoffs GT-1 champion. “From there I was just trying to run as best I could, trying to catch up.  But I knew once I caught them it would be awfully hard to get by, but I had to try.”

Ebben, indeed, closed in on Lewis while Pintaric, in the No. 57 Kryderacing/Ave Racing Cadillac CTS-V, stretched his lead to as much as three seconds.  Lewis was experiencing a lack of top-end speed due to an issue with his front hood.

“Right away, our hood started to bow up,” Lewis said. “I think it’s a remnant problem from when we broke the nose box on Thursday during a problematic week here.  It was turning us into a big parachute down the straights.”

But even with the added drag, Lewis was able to hold the second spot.  And toward the end of the race, he closed the gap on Pintaric to one second.  But laps ran out and Pintaric claimed his second Runoffs win, but first National Championship.  His first Runoffs win came seven years ago in STO, which was a supplemental class at that time.

“This is an emotional moment. It’s the Runoffs. It’s Indy. It’s GT-1. It’s great to be here,” Pintaric said afterwards. “I was thinking about this moment the whole month before we came out. Being a member of the SCCA is a privilege. Being at any Runoffs, regardless of venue, is very exciting. Being at Indy is the ultimate experience.  But being the National Champion at Indy, it’s a high honor.”

For Lewis, this was his 16th podium appearance at the Runoffs.

“We’ve been around a while,” Lewis joked. “The car is 17 years old this year, so it’s a grandpa compared to these youngsters’ cars”

“Toward the end the car was starting to push a lot, but in the beginning and middle of the race the car was real good,” Ebben noted.