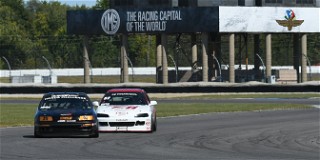 In a brilliant display of patience, Adam Roberts, of Hillard, Ohio, won his first national championship with Eric Kutil, of Columbus, Ohio, finishing just .674 seconds behind him for second. Garret Dunn, of Commerce Township, Michigan, rounded out the podium in third.

“I am happier than I have ever been,” said Roberts. “I’ve been dreaming of this moment the entire year and for it to finally be a reality I feel like I am just living in a dream.”

Fifty-one of the 57-car field took the green flag in the 19-lap STL race with Roberts starting on pole. Danny Steyn, of Fort Lauderdale, Florida, joined Roberts outside on the front row. Kutil and Dunn started from row two. On the start, Roberts and Steyn made incidental contact, which ended Steyn’s race with a flat front right tire in the first turn. Dunn took advantage of the mishap to claim first. However, Roberts, who recovered from the start, took advantage of a missed shift from Dunn to reclaim the lead. Dunn’s No. 136 Honda CRX Si faded into a distant third behind Roberts and Kutil.

Kutil stole the lead from Roberts with a slingshot move on the front straight on lap four. Driving the Carbotech/Auto Assests/Gridlife machine, Kutil led by a comfortable two-second margin for most of the race until lapped traffic slowed his momentum. Roberts slowly chipped away the gap Kutil created. After leading 13 laps, Kutil conceded first place to Robert’s Honest Speed Shop/Myers Motorsport Honda CRX Si.

Side-by-side, the pair battled for the highest step on the podium. Roberts tightly defended his race line, yielding zero room for Kutil to make a move. Lapped traffic compromised Kutil’s run once again as his fight for first was hindered from contact made by a slow car. Kutil’s No. 82 Honda Civic Si went sideways. He recovered, but the hunt for his first Runoff victory slipped by as Roberts capitalized on the contact to take the checkered.

“We started to pull away and lapped traffic really hindered our speed today,” Kutil said. “It was a large field and that happens. We are happy to take away our second national podium today.”