Two in One Day for Aquilante with GT-2 Runoffs Victory 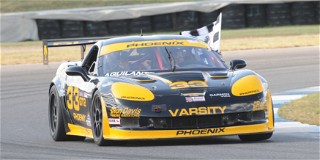 INDIANAPOLIS, Ind. (September 29, 2017) – The opening day of the 2017 SCCA® National Championship Runoffs® at Indianapolis Motor Speedway was pretty good for Andrew Aquilante.  To start the day, he became the first-ever winner of a Runoffs event at Indianapolis with a dominant performance in the Touring 1 class.  Then to close out the day, he mirrored his morning performance with an impressive victory in the GT-2 class, making that eight Runoffs wins for the driver from Chester Springs, Pennsylvania.

Aquilante held the fastest GT-2 qualifying times all week on the 15-turn, 2.592-mile road circuit.  At the start of the race, he easily moved into the lead. The No. 88 Dublin Mazda/Hoosier Mazda RX-8 of Taz Harvey fell into second with Preston Calvert in the No. 77 Phoenix/Hoosier/Hawk Chevrolet Corvette applying a massive amount of pressure.

By the end of the first lap, Aquilante already had a four-second lead.  He stormed on, unchallenged, for a 33-second GT-2 win in his No. 33 Phoenix/Hoosier/Hawk/Varsity Chevrolet Corvette.

“It’s pretty cool to win two races in one day at Indianapolis,” Aquilante admitted. “While this track layout, on paper, looks pretty easy, it’s not.  It’s pretty challenging. It’s a lot of work, but it’s really satisfying to do what we do. And I’m pretty happy to do what we did.”

Behind Aquilante, Harvey and Calvert where duking it out.  Using every inch of the track, even the curbs, Calvert was trying everything to get by Harvey.  On the second lap, Calvert got by and set off to try and catch Aquilante.  However, he knew that was a tall order. So, he was happy with a runner-up position.

“Unless Andrew is in an inferior car, I will never beat him,” a humble and gracious Calvert noted.  “There are very few people in this business right now who can both build a car and drive the car at the level that Andrew and Kurt Rezzetano can.  And I am blessed to have both of those guys in the team I drive with, and they are very generous with their knowledge.”

While Aquilante and Calvert where clicking off laps, a fantastic fight was raging for the third and final spot on the podium.  Harvey faded and in his place came Jonathan Start in the No. 51 Kalin Const/Hoosier/Encore/G-Loc Dodge Viper ACR-X, Tom Patton in the No. 50 Hoosier Race Tires/RedLineOil Sunbeam Tiger, and the No. 44 Engineered Components Company Dodge Viper of Adam Andretti.  Those three waged war for several laps until Andretti finally found his way clear.

With time running out, Andretti caught a glimpse of Calvert’s car down the track.  Calvert had dialed back his driving to conserve equipment, and traffic was starting to impact lap times.  Seeing a chance to improve his position on the podium, Andretti took a stab at Calvert.

“Once I looked in the rearview mirror and didn’t have any threat there, I put my head down and really started to attack to try and catch Preston, fill his mirrors up.  Traffic really helped out to close that gap,” Andretti said after the race.  “My opportunity came to go three-wide around Turn 4 on the outside, and traded a little paint with Preston.  But I drove off the track and mowed a little grass for the Speedway.”

Patton finished in the fourth position, and Smart rounded out the top-five finishers.

The Sunoco Hard Charger award went to No. 40 Richard Ruckh who started 33rd and finished 25th in his Amsoil Chevrolet Camaro.