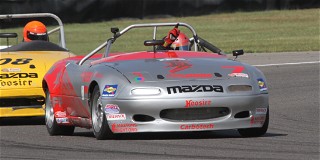 “To come to Indianapolis and stand on the podium where the greatest race car drivers in the world have stood and now to be part of that history feels really special,” Prill said as his eyes filled with tears. “I’ve been the perennial bridesmaid of the Runoffs for so long that this win feels like a long time coming.”

The 42-car FP field completed 18 laps before the 40-minute clock expired. Race winner Prill started pole-position with the SpringfieldDyno/Hoosier/Hawk Mazda Miata of Henry joining him in the front row. As the group of cars rounded Turn 1, Prill started to pull away, but got sideways in Turn 5, allowing Charlie Campbell of Corry, Pennsylvania, to pass. Prill quickly recovered his P1 spot. The pass in Lap 1 was the only time Prill conceded first place.

A full-course yellow on Lap 7 ended Prill’s five-second lead, grouping up the field for the first restart of the race. Again, Prill had a successful start and pulled away from second-place Joe Huffaker of Petaluma, California, after Huffaker locked his wheels going into the Horseshoe. The error allowed Henry to challenge Huffaker for the second spot.

Another full-course yellow was caused by a single-car wrecking nose first into the tire barrier on Lap 12. The incident ate up a majority of the race clock while the safety crew reinforced the wall and extracted the uninjured driver. On the restart Henry’s No. 137 and Perona’s No. 83 Browns Oil Service/Lucas Oil/IUPUI machine locked wheels, allowing Peter Morton of Milford, Michigan, to pass. Henry and Perona recovered their positions as Morton dropped back to P6. Perona on the inside of Henry locked wheels one more time as the pair fought door-to-door for top-five positions. Chuck Mathis of Saint Jacob, Illinois, blew right by the battling duo to take the fourth position. Again, Henry and hometown-pilot Perona recovered to take back third and fourth.

After holding second for 14 laps, Huffaker’s Huffaker Engineering/Hoosier machine unexpectedly lost speed on the penultimate lap.  Huffaker did not recuperate and retired the race which allowed Perona and Henry to finish on podium position.

“When I saw Joe slow down, all I could think was get to the podium,” Perona said. “I knew from the start it was going to be hard to get around Sam. He raced me really hard and really well. I had to work for every inch and had a great job doing it.”

Mathis took fourth in his AMT Racing Engines/Hoosier machine and Kevin Ruck of Atascosa, Texas, rounded out the top-five in his No. 73 Hoosier/Honda/Hawk Acura Integra. Dave Patten of Durbarton, New Hampshire, received the Sunoco Hard Charger award after improving 12 positions.