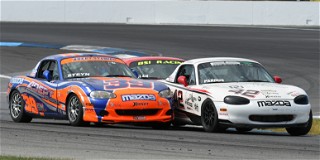 (updated: September 30 at 6:55 p.m. Eastern to reflect a change in second place in the official results)

INDIANAPOLIS, Ind. (September 29, 2017) – Spec Miata (SM) has been an exciting class to watch all week during the SCCA® National Championship Runoffs® at Indianapolis Motor Speedway.  More than 100 drivers posted qualifying times during the week, and a Last Chance Race was held late Thursday afternoon to decide who would fill the final 12 starting positions.

Spec Miata qualifying was led all week by Chris Haldeman in the No. 28 X-Factor Racing machine who brought the 72-car field to the green flag for the start.  The gaggle of colorful cars made it clean through Turn 1, which is a credit to the caliber of skill Runoffs drivers exhibit.

Haldeman held the lead early, with Preston Pardus’ No. 42 Danus Utilities/5X Racing/ESR/PR Mazda Miata and the No. 39 Adept/Rossini/OPM/G-Loc Mazda Miata of Danny Steyn in tow.  But within only a couple laps, things started to change rapidly and often.

The race, which went without a full-course yellow, came down to the last lap.  As the lead pack came down the front straight it was Rollan of Miami, Florida, who held the slightest advantage over Steyn of Fort Lauderdale, Florida, and Pardus of New Smyrna Beach, Florida.  Going into Turn 1, Pardus positioned himself outside Rollan and right up against the white, outer cement wall while Steyn moved to Rollan’s inside.  Smoke curled up from Pardus’ car as he executed a late-braking maneuver to gain the advantage and the lead -- a lead he never relinquished as he went on to become the 2017 Spec Miata Runoffs Champ.

“This is big. This is awesome,” Pardus said after the race. “The historical significance of this track is major.  It’s paved the way for the past 100 years. To say I’ve actually got to race here is incredible. And to make it a Runoffs win is even more incredible.”

While Pardus moved into the lead, Steyn managed to maneuver himself into second spot.  He looked to be taking a bit of a defensive posture the last half of the final lap, and crossed the finish line second.

Unfortunately, Steyn was later disqualified by the Chief Steward for a non-compliant car.

Rollan brought his car home in third, elevated a day later to a runner-up finish.

“Everyone kind of thought beforehand it was going to be a Texas thing this year,” Rollan joked.  “It’s a great thing the three of us from Florida are here.  We made it.”

The Sunoco Hard Charger award went to TRB Autosport No. 19 of Justin Elder who started 52nd and finished 29th in the large class.

Image: Preston Pardus (No. 42) fights Danny Steyn (No. 39) for the Spec Miata win at the Runoffs
Credit: Jay Bonvouloir