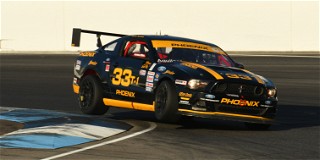 INDIANAPOLIS, Ind. (September 29, 2017) – Andrew Aquilante became the first driver ever to win an SCCA National Championship Runoffs race at Indianapolis Motor Speedway Friday morning.  For Aquilante, this is his seventh Runoffs victory.  But taking the win at Indianapolis in Touring 1 (T1) is something special.

“It’s pretty cool to do this at Indy and be the first guy to win a National Championship at Indy,” Aquilante said after the race while sitting in his No. 33 Phoenix/Hoosier/Hawk/Penske Ford.  “This is a bit of redemption for last year at Mid-Ohio.”

Aquilante, from Chester Springs, Pennsylvania, led the 21-car T1 field to the green flag after a dominant performance all week in qualifying.  But in Turn 1, Ross Murray drove around Aquilante on the outside in his No. 84 Complete Perf Motorsports/Hoosier Dodge Viper ACR-X to take the lead.

“I didn’t have a plan at the start, was just pretty much rolling with the punches,” said Murray, the defending T1 Runoffs champion. “Somehow, I got a little bit of an advantage going into one.  But I had the outside line and had to give Andrew room, so I was slow for the next corner.”

Aquilante established himself in the lead from that point and simply never looked back.  By race’s end, Aquilante had a 17-second advantage on Murray in second place.  Mark Boden, in the No. 47 Fall-Line Motorsports BMW, finished third about 28 seconds back.  But while Aquilante had a comfortable lead, he wasn’t necessarily comfortable up front as a racer’s mind can start to play games.

“It felt like everything was starting to shake and make some noises,” Aquilante said.  “I just thought, ‘c’mon, let’s not do this right now!’”

Finishing fourth was Chris Durbin in the No. 76 HAWK Performance Ford Mustang. Tim Myers in the No. 22 G-Loc/The Hammer/LOML/Hoosier Dodge Viper ACR-X, brought the car home in fifth.

The Sunoco Hard Charger award went to Durbin who started in tenth and finished fifth.