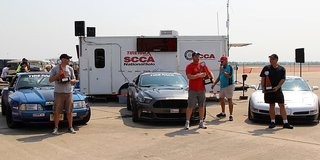 LINCOLN, Neb. (Sept. 5, 2017) -- Things heated up quick this past weekend at the CAM Invitational, a precursor to the 2017 Tire Rack Solo Nationals. Competitors took to the tarmac with perfect weather, which is a good thing because the driving was some of the closest competition seen since the Invitational started four years ago.

By Saturday’s end, the top 20 times were within tenths, and in many cases hundredths, of one another. If drivers weren’t on their A-game, they weren’t going to make the podium. Cones turned out to be a crucial factor, and several of the top contenders could not shake cone penalties. No one felt this more painfully than Dave Feighner who entered the competition as one to watch for the top spot. Feighner wheeled his CAM-C car, turning in times less than two-tenths off the lead.  But he took some cones along for the ride, which bumped him down in the standings. Among the top 10 in CAM-C, there was less than .5 seconds between the times -- which made for some excited spectators.

While the times were close, with tiny margins of variance, the cars themselves were as varied as you can get. Joining the usual suspects of Camaros, Mustangs and Corvettes was Don Knopp in an original 1966 Shelby Hertz Rent-a-Racer complete with a four-speed transmission. Running another unique car was Wayne Atkins in his former C-Prepared 1985 Camaro, now running a set of BF Goodrich Rivals and competing in CAM-T.

Speaking of Atkins, he managed to come out on top Saturday in the CAM-T class, taking the podium. David Lousteau Jr. took the win in CAM-S, and Dennis Healy grabbed the CAM-C victory after traveling all the way from Lake Oswego, Oregon.

Sunday’s shootout was more of the same nail-biting competition with drivers duking it out by mere tenths. But in the end, there were a couple surprises.  Essentially, two of Saturday’s leaders didn’t make it through to the final elimination.

In CAM-C, Dennis Healy took the bracket away from Dave Feighner in the final round with a non-indexed time of a 37.586, surpassing Feighner by 0.187 second. In CAM-S, Saturday’s leader, Lousteau, was knocked out in the third round by Alex Tzotzil who managed to take the next two brackets for the class win. Saturday’s leader in CAM-T, Wayne Atkins, was also knocked out early by Curtis Cargill.  However, both gentlemen were surpassed by Jeffery Darbig who took the top spot going into the final cross-class shootout.

Healy, Lousteau and Darbig then went for all the marbles.  With much fanfare, cheers and groans, Healy scooped up the big prize in his CAM-C car, truly demonstrating that any car can win when it comes to the CAM class with the right car and driver combination.

And with that, the 2017 CAM Challenge season came to a close.  Thanks to all the participants and sponsors who made it one wonderful year.