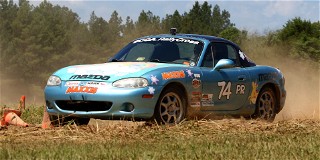 TOPEKA, Kan. (July 12, 2017) – The second round of the DirtFish SCCA®  RallyCross National Challenge attracted 69 participants from as far away as Oklahoma and took place at The Rally Farm in Catlett, Virginia – a facility that not only farms trees, hay and alpacas, but also hosts a wide variety of off-road driving events.

The Challenge weekend kicked off with a Starting Line RallyCross event, where drivers brand new to the sport got a full day of classroom time and on-course instruction before participating in the national event.

During the competition rounds, it was a story of dust and mud – mud created from heavy rains early in the week led to high cone counts as drivers slid unpredictably through, into and around the cones. After the course dried out, the next story was dust – with large clouds drifting across the field as competitors scrambled and pushed to make up for lost time or hold on to solid morning runs.

Modified FWD was an exciting battle for first, with John Royer leading Danny Kao by 9.4 seconds overnight despite having a tire debead. Kao helped Royer replace his tire, and then put in a strong effort -- but came up just 0.2 second short of the win in a nail-biting finish.

High cone counts provided high drama in Modified RWD, and when competitors went to bed Saturday the top five were within 10 seconds. Vaughn Micciche led after day one, and held on for the class win over John England after the second day. When the sun went down on the first day of competition in Modified AWD, the top three of four trophy spots were within four seconds of one another. When the dust settled on day two, Adam Kimmett had driven his Subaru Impreza to the win ahead of Radim Hlidek, who started the event with a DNF penalty for being late to class inspection.

In the Stock classes, Chang Ho Kim drove to a commanding Stock FWD victory in his Integra Type R over Jake Warriner who secured the second trophy spot after a very close three-way battle on day one. In Stock RWD, Logan Altmyer drove his Nissan to a 3.9-second win over Timothy Maxey, the two drivers having a great battle over both days. In Stock AWD, Jim Golden held an eight-second lead in his Subaru Impreza 2.5 RS after day one, and drove a smart set of runs to win by four seconds over Jason Zerbe.

For Prepared class competition, Sunday course designer, Andy Thomas, pulled ahead of Robert Seelig after a super close day one to win in Prepared FWD, partially thanks to 4 cone penalties for Seelig, and Shawn Roberts drove a fast and amazingly cone-free event in his Miata to win Prepared RWD. Keith Pizio led Warren Elliott in Prepared AWD by a half second after Saturday, but it wasn’t to be as Elliott drove a cone-free second day to take the class win.