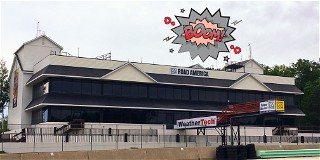 BOOM!! -- The explosion’s crack was both sharp and thorough. Its deep resonance caught me off guard; vibrated my very innards.  A tiny, gray, blossoming puff sitting motionless in the sky seemed unassuming compared to the report that reverberated off racecar trailers and track buildings before travelling off into the green hillside only to be echoed back toward the circuit once again.

The “5-Minute Bomb” always surprised this writer as a young race fan. Even when I knew it was coming, even when I watched the skies for it, the detonation’s shockwave rippled through me before I could ever catch a glimpse of the black-powder bloom. That “BOOM” meant it was time to put away the picnic basket, pick up the Frisbee or football, and head trackside as there were only five minutes until mysterious, helmeted Gods came flying by in colorful cars that made a whole lot of noise and gifted intoxicating aromas into the scene.

The 5-Minute Bomb was an SCCA entity of the ‘60s, ‘70s and ‘80s at tracks such as Mid-Ohio Sports Car Course, Road Atlanta and others. It became so iconic that some professional series adopted the tradition.  For more than 45 years, the 5-Minute Bomb has been part of the Chicago Region June Sprints --- until this year after the neighbors complained about the noises above.

“Road America, through the ‘70s and ‘80s, was pretty desolate. Most of the area around it was farmland,” said George Laws, the current Competition Chairman and 45-year member of the SCCA and Chicago Region. “Now that there are more and more people around, we started to get complaints about scaring dogs and various other things. I’ve received a number of phone calls and emails into the Chicago Region office letting us know the neighbors really didn’t appreciate and weren’t fans of the 5-Minute Bomb. They’d put up with the noise of the cars, but they didn’t see any need for the explosions.”

“Every one of the June Sprints has had aerial bombs, and I’ve only missed one June Sprints,” Laws continued. “That bomb brings you back to reality, and it will be missed this year. But I’m always in total amazement that 62 years later, the Chicago Region is doing the same June Sprints. It’s a fun time, a fun weekend, and it’s great the June Sprints are still popular.”

Alas, there will be no 5-Minute Bomb at this year’s WeatherTech Chicago Region June Sprints.  As such, I won’t be warmed by the low, vibrating punch.  But I’ll know something is there by its absence, which will give me pause to fondly float in the memory of my family, the sport and the Club I love.

If you can’t be trackside to immerse yourself in the WeatherTech Chicago Region June Sprints at Wisconsin’s Road America in Elkhart Lake, follow all the Hoosier Super Tour action this weekend with live timing and scoring, lap notes, live video, Super Tour Radio presented by Hoosier Racing Tire and more via the SCCA® Pit Board available through www.scca.com/live.