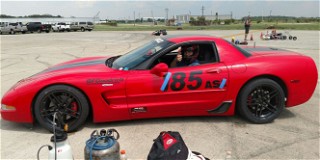 TOPEKA, Kan. (June 6, 2017) – The Tire Rack SCCA® Match Tour in Peru, Indiana demonstrated that summer is just around the corner with temperatures in the high 80s, and heat indexes even higher. Course designer and Indianapolis Region’s own Will Lahee knocked it out of the park. The course did indeed have "something for everyone" as promised with offsets to start, flowing into a choose-your-line teardrop that opened up into a high-speed sweeper before a big slalom. After a few more maneuvers, racers tripped the finish lights and immediately wanted to run it again and again.

The Tire Rack Match Tour format is designed to be a fun introduction to Tire Rack SCCA National Solo® events. First time SCCA National Tour competitor Roy Handoko, out of Chicago Region, started off Saturday with three fast runs to end Session 1 on top of H Street class. Laura Harbour, who joined the boys in H Street, threw down a flyer on her last run to snag second. Tim Sholar found redemption in Peru after he coned away his two previous SCCA National Tours this year to earn the top spot in H Street by the end of Session 2. Handoko would find some redemption of his own in the Lucky Dog Challenge, making it all the way to the final two. An unfortunate knocked cone cost him the Challenge win.

A Street saw dueling Corvettes with tire brand being a possible deciding factor. Justin Batten took top honors with his co-driver, David Entz, in second, posting almost identical times on Bridgestones with a 0.170-second margin of victory for Batten. The BFGoodrich-clad Chevrolet Corvette Z06 of Brian Regganie held on to the third and final trophy spot.

In D Street, Brian Priebe came out of the box strong, taking the lead on his first run. But Sean Grogan would take over on his second run and never looked back. Grogan took the DS win with the fastest afternoon time, while Priebe claimed the other trophy in second.

The largest class of the weekend was C Street with 14 drivers. Robert Carpenter and co-driver Chris Harp were impressive to watch pilot a fully prepared and dialed-in Mazda MX-5 to first and third place, respectively. Paul Gibson was equally impressive in his 2004 Mazda RX-8 as he took second, proving the rotary can still hang with the brand-new Miatas. Rick Cone and David Alessandrini rounded out the trophies in fourth and fifth, respectively. Cone was the only trophy winner in the class on Bridgestone tires as the rest represented BFGoodrich.

Kart Modified may have had a small entry with just one trophy awarded, but Cody Pennell posted some of the fastest raw times of the event and followed up that performance with the fastest index time of his heat on Sunday morning, earning him the Top Qualifier honors.

The bracket challenges make Tire Rack SCCA Match Tour unique, and at this event we saw some great battles. There were quite a few fastest times of the event for drivers as the term "broke out" was heard frequently over the radio, kind of fitting as the venue’s next-door neighbor is a prison.

The Lucky Dog bracket was filled out by drivers throwing their name into a hat for a random draw. As mentioned previously, Roy Handoko came up a cone short and Darren Daubenspeck took full advantage, piloting his A Street Chevrolet Corvette to the Lucky Dog Challenge Victory.

In the Underdog Challenge, Brian Regganie drove his Chevrolet Corvette Z06 to the win over the Mazda MX-5 of David Alessandrini and the Street Modified FWD Honda Civic piloted by Vinny Taibi. Along the way, Regganie beat his dial-in twice, eventually being the only driver in the final round to beat their latest dial-in. Regganie advanced to the final by defeating Jacob Meuth, a cone being the only thing standing between his CAM-C Ford Mustang and an Underdog Challenge final berth.

The Top Dog bracket featured the fastest drivers of the weekend in a showdown that was one for the history books. It all came down to Scott Giles in his F Street Prepared Honda CRX, Tom Regganie from Kart Modified and Bill Keese in his G Street Ford Focus ST for the Top Dog final shootout. Scott Giles would prove the CRX was more than up to the task, beating his dial-in time by 0.052 second and claiming the Top Dog victory in Peru. Both Keese and Regganie were within 0.75 of their dial-in times, but unable to improve on them like Giles.

Photo: Brian Regganie gives a thumbs up after winning the Underdog Challenge at the 2017 Peru Match Tour

Words and Photo by Chris Perry